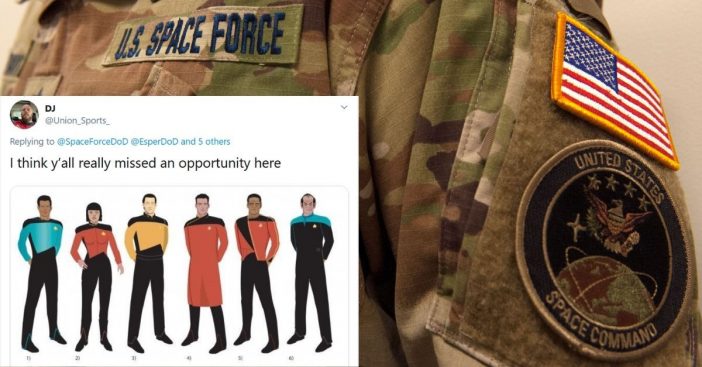 Well, sort of. To streamline its incorporation into the rest of the military, the US Space Force is deriving its uniform from other branches. To cut time and money designing a new uniform, the USSF, as it’s known in shorthand, uses green camouflage. While this is certainly a recognizable symbol of military involvement, viewers on the internet had a few questions and comments. Above all, their reactions focused on wardrobe choice.

Is green camo the best choice for space?

Armies from various focuses and countries alike use certain colors for their uniform’s fabric. A sniper training during a snowy winter would don white from head to toe. Likewise, a soldier navigating dangerous streets in the desert would wear earthy tones. When viewers saw the US Space Force’s uniform with its green camo pattern, they had a few questions with these trends in mind.

Initially, the USSF’s Twitter page just wanted to show off the new nameplates. Posts explained the desire to be cost-efficient when using this existing uniform. But people with an eye for nostalgia immediately remembered uniforms worn by their favorite space heroes. One Twitter user called the uniform choice a “missed opportunity” before sharing a picture of outfits from Star Trek. They too could feel like members of the USS Enterprise!

The US Space Force doesn’t need dark uniforms yet

In response to all the jokes about using green camo in an ongoing void of black, unexplored space, the USSF’s Twitter manager elaborated. A post explains that, since members of the US Space Force won’t be up in space yet, they don’t currently need different uniforms. Ultimately, they shall resemble the comrades they’re serving beside on the ground.

As of January 17, there has been no word of a different dress uniform for the newest military branch. Members contribute a wide range of specialties to space and space operations, including engineering, security, and intelligence. While its uniform appears similar to other branches, the USSF differs from them, particularly from branches like the Marines. Air Force Secretary Barbara Barrett explained, “The Space Force won’t be measured by the number of people unlike for instance the Marine Corps, which is really a labor-intensive service. Space Force is much more measured by the technology and the capabilities.”

Members will look like their joint counterparts they’ll be working with, on the ground.