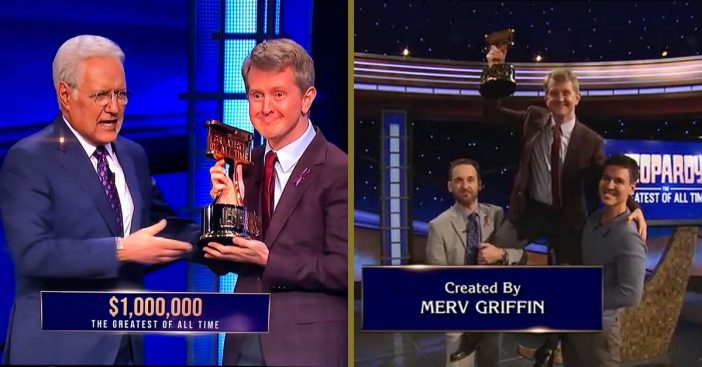 It is official: Ken Jennings is the first-ever ‘GOAT’ or Greatest of All Time on Jeopardy! Ken, James Holzhauer, and Brad Rutter competed in a new Jeopardy! competition, pitting some of the best players of all time against each other. Last night, Ken came out on top.

Alex Trebek handed Ken the trophy and said, “It has taken 15 years Ken Jennings to finally answer the question, ‘Is he as good as he appeared to be in his great run on Jeopardy!?'” In addition to the trophy, Ken won $1 million. He has now won $4,370,700 from all of his time on the game show.

According to FOX News, “The epic GOAT matchups followed a format Jeopardy! has never used before. Each night of play was, as Trebek called it, “a two-game total point affair.” The three players duked it out in two back-to-back traditional half-hour games. The points (or dollars) earned in each one were added together. The contestant with the highest score at the end of the hour earned one point. Going into Tuesday night’s competition, Jennings had two points to Holzhauer’s one. The first player to three points — Jennings — won it all.”

During the tournament, all three players were seen wearing purple ribbons. These ribbons were in honor of Alex Trebek and his current battle with pancreatic cancer. During the show, Brad said, “I’m going to miss you, Alex. It’s been a privilege and an honor to be associated with this program.”

And I would have GOAT away with it too, if it weren’t for you meddling Kens pic.twitter.com/dtYhNEOQ3Q

After Ken’s win, James roasted him a little bit on Twitter. He made a Scooby-Doo themed graphic and captioned it, “And I would have GOAT away with it too if it weren’t for you meddling Kens.”

What an exciting tournament! Congrats to Ken for becoming Jeopardy! Greatest of All Time contestant! In conclusion, watch his win below:

Click for next Article
Previous article: Woman Finds Her Lost Wedding Ring In A Bag Of Popcorn After Missing For A Month
Next Post: Bruce Springsteen’s Youngest Son Has Been Sworn In As A New Jersey Firefighter