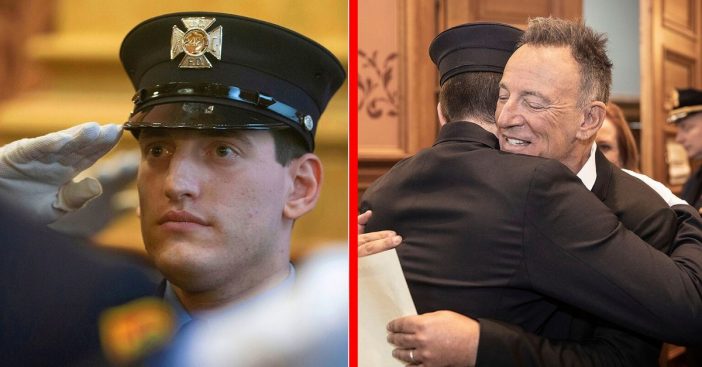 Bruce Springsteen’s youngest son, Sam, has just been sworn in as a firefighter in the state of New Jersey! At 26 years old, he is one of 15 that was sworn in by the mayor of Jersey City, NJ in city hall. “It was a long road, he was very dedicated for quite a few years and we are just excited for him today,” Bruce proudly says of his son.

Sam talks about his training and admits that it wasn’t easy. The new additions to the fire department team bring the total number up to 66 firefighters. Mayor Steven Fulop notes that this is a “historic high.”

Back in August, Bruce’s wife and Sam’s mom Patti Scialfa would offer Sam ‘congratulations’ on social media on becoming an NJ firefighter. “CONGRATULATIONS 🔥” she writes on Instagram back in August. “…You followed your dreams…JC firefighter .. 💪Stay safe 💪.. ❤️love your brave heart❤️.”

RELATED: American Firefighters Applauded As They Arrive To Help In Australia

Already putting his skills to the test

Since graduating from the fire academy, Sam kept himself busy in the meantime. He has volunteered at the Colts Neck Fire Department, the Long Branch Fire Department, and the North Wildwood Fire Department. While doing so, he and another firefighter saved a fisherman who was stuck in the mud. Already putting his training and skills to the test!

Click for next Article
Previous article: Ken Jennings Is Crowned ‘Jeopardy!’ Greatest Of All Time Contestant
Next Post: Celine Dion Honors Her Late Husband On The Anniversary Of His Death