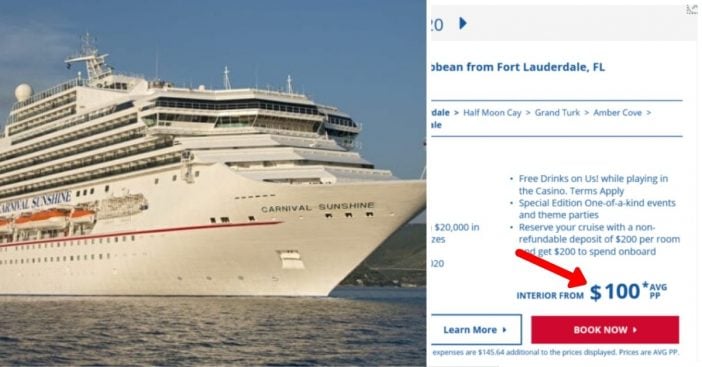 A recent pricing glitch at Carnival Cruise Line has given way to super-low cruise rates. This means that a bunch of their cruises are now being offered at discounted rates. And much lower than what they should be going for. Last Friday morning, Carnival would send out a promo email that details several cruises with discounted rates. For example, a bunch of 7-night cruises were being listed at $100. Moreover, a 6-night cruise along the Western Caribbean departing on February 9th was also going for $100.

However, the website was showing that an interior stateroom on that sailing was really going for $509. Reports say that “wires got crossed somewhere” and began showing these bargain rates to any guest who was logged in with their VIFP account.

One cruiser attempted to purchase one of these discounted cruise rates, but was told that the rate was a mistake and would not be honored. “They told me that I would never find a fare that low a month before a cruise this time of year,” the anonymous person shares.

This “time of year” is generally referred to as “wave season.” It’s the period of time between January and early spring when cruise lines often sell a large percentage of their staterooms for the year. This time of year does involve some promotions and other discounted rates, but nothing to this extent. Pricing errors like this have happened before and should be questioned if it sounds too good to be true.

Just a few months ago, a Facebook group shared news about a February 2021 sailing on the Norwegian Pearl with similarly very low prices. Cruisers going solo were able to book balcony cabins for an 11-day sailing for under $300. Of course, people jumped on this quickly, but are soon disappointed when Norwegian would cancel the cruise. Those who booked this cruise complained that Norweigan should honor this price and even considered taking legal action.

Sadly, when it comes to Carnival Cruise Line and their ticket contract, there’s no real way to pursue legal action. This is because the contract is what ticket buyers agree to when purchasing a ticket.

The contract says: “In the event that a cruise fare listed, quoted or advertised through any website, Carnival sales person, travel agent or any other source is booked but is incorrect due to an electronic error, typographical error, human error or any other error causing the fare to be listed, quoted or advertised for an amount not intended by Carnival, Carnival reserves the right to correct the erroneous fare by requesting the Guest to pay the correct fare intended, or by canceling the cruise in exchange for a full refund, but in no event shall Carnival be obligated to honor any such booking resulting from the error or otherwise be liable in such circumstances.”

Click for next Article
Previous article: You Can Now Purchase Scarves That Look Like An Obnoxiously Long CVS Receipt
Next Post: Lisa Marie Presley’s Kids Are Not Allowed To Attend Grandfather Elvis’ Birthday Party At Graceland