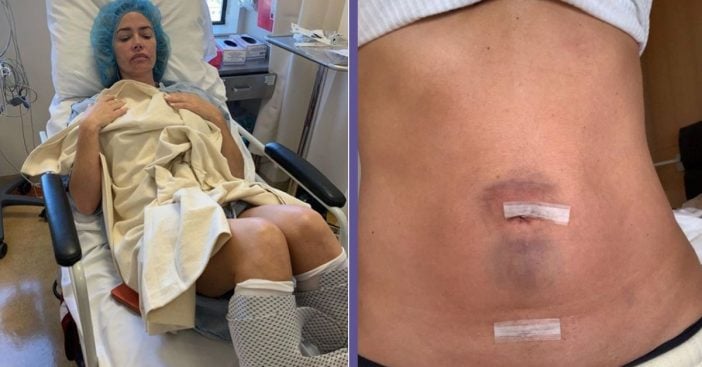 Denise Richards of Real Housewives of Beverly Hills star just had emergency surgery for four different hernias. Her husband, Aaron Phypers, shows the entire journey including pre-op and post-op photos. In the caption, he writes, “To the most incredible woman my soulmate. I am always in awe of your Beauty perseverance, dedication in all you do. These photos taken a couple of months ago from an emergency procedure femoral hernia not one but four! 6 hours waiting close by. Love you baby everyday getting stronger!”

Richards addresses the photos, saying, “This was a couple months ago and turned out to be a good lesson for me to always listen to my body. Being a mom, wife and having a career, sometimes it’s easier to just be strong and power through.”

Richards continues, saying that she “thought the pain and my other symptoms would just go away. They did not and got a lot worse.” The 48-year-old thought she only had one femoral hernia. After seeing a doctor, they would confirm that she actually had four. two femoral and two inguinal hernias. Inguinal hernias are visible at the top of the groin, while femoral hernias are lower down and tougher to see.

RELATED: Denise Richards & Charlie Sheen’s Daughters Are Looking All Grown Up In The Family Christmas Card

While Richards obviously had all four repaired, she says that she regrets waiting as long as she did. “I waited way too long and didn’t even tell my husband how bad I was feeling (I know it was stupid),” she says. “Gotta always listen to our bodies and take care of ourselves.”

Richards has had quite the year with big changes in her life. In addition to this 4-time hernia surgery, she also made a big change to her diet. Many fans noticed earlier this year that her thyroid was enlarged and she had been ignoring it. She decided to change her diet and saw huge improvements and it ended up being a gluten intolerance. Her family has remained closeby through all of this.

We’re so glad to hear she is ending 2019 feeling happier and healthier than ever!