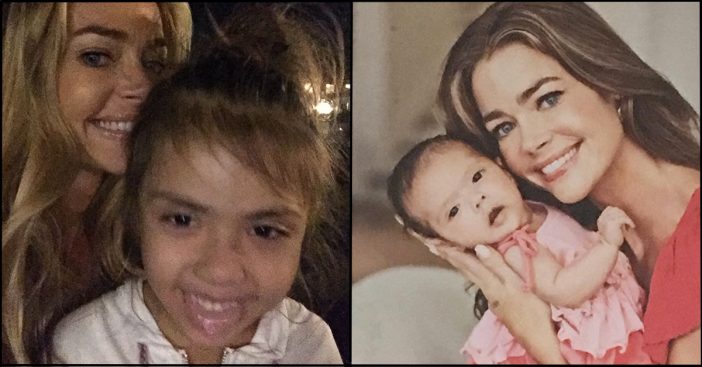 The Beautiful Bond girl we know and love, Denise Richards knew she wasn’t done having children after her divorce from Charlie Sheen in 2006. In 2011, after spending just a year and a half “processing”, Denise Richards adopted her third daughter, Eloise Joni Richards. In an interview with OWN in 2013, she opened up about adoption and her desire to have more children. Note: Watch Richards full interview with Oprah below.

Denise Richard’s divorce from then-husband, Charlie Sheen was anything but private. After her matters were settled, she hoped to remarry and grow her family. Realizing her life wasn’t heading down that path, Richards decided on adoption. “I always wanted to adopt,” she said – discussing her desire for more kids in an interview with Oprah. The World is Not Enough actress and Real Housewives of Beverly Hills star adopted a baby girl from the United States. Denise named her daughter, Eloise Joni Richards after her late mother, Joni Richards who’d sadly passed away in November of 2007.

Although Eloise Joni Richards had some late development issues with walking and talking, last June she graduated from preschool and seems to be living her best life. Now 8 years old, developmental issues discovered to be caused by a rare disorder, chromosome 8, monosomy 8p.

Adoption and Children with Charlie Sheen

Eloise Richards is the third of Denise’s kids, Joni has two older sisters to look up to. Both of her sisters, Sam and Lola Rose Sheen are from her mom’s marriage to ex-husband Charlie Sheen. Richards also took in Sheen’s twin sons, Max and Bob, during his custody battle with Brooke Mueller.

It appears that both Richards and Eloise are as happy as can be, with photos of them bonding all over Richards’ Instagram. Denise Richards said the secret is, “Not worrying about the small stuff.”

All we know is that despite all the changes since 2013, Richards has gotten her dream of growing her family and continuing on with motherhood.

“I wanted to be a parent and want to raise my kids,” Richards said. “I love being a mom more than anything. Motherhood has changed her whole outlook on life. It’s wonderful to see life through their eyes.”

Are you happy to see how Eloise Joni Richards has grown since she was adopted in 2011? Check out this 2013 interview with Denise adapting to her new life with Eloise, and don’t forget to share with your friends!

Click for next Article
Previous article: 10 Things You Never Knew About The Making Of “Jurassic Park”
Next Post: Molly Ringwald Opens Up About How Living Her Teenage Years In The Spotlight Affected Her