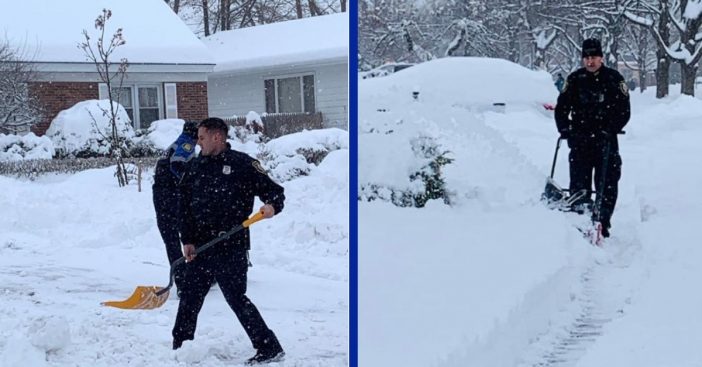 The police department posts the photos of the men in action on their Facebook page, telling the story. “Without hesitation, Police Officers William Pierce, Christopher Stiles, and John Schueler all drove to the woman’s home to assist her and worked together to clear more than a foot of snow from her sidewalk and driveway,” the Facebook post reads.

The post soon goes viral online, earning 14k reactions, 1.5k comments, and over 5,000 shares. People were quick to jump into the comments section, praising these police officers for their acts of kindness. “💖💖💖 Everyone should be out helping their elderly, senior neighbors,” someone writes. Another person says, “Great job guys. You really believe in community. That’s why you picked such a special job. Stay safe.”

Steve Smith, PIO for the Albany Police Department, also has a Twitter account where he’s thanked media outlets for recognizing the officers’ work. “Thank you, @people for recognizing the work and compassion of #Albany’s finest. We ❤️ our community and are always ready to help those in need,” Steve says in response to PEOPLE magazine’s post.

They love giving back to their community, especially during the holidays

Thank you, @people for recognizing the work and compassion of #Albany’s finest. We ❤️ our community and are always ready to help those in need. https://t.co/IblaqvHXUH

This kind of act is not rare for the Albany Police Department. Just last month, they helped deliver 500 meals to people who needed them during Thanksgiving. They have been doing things like this for the past few years and have teamed up with other organizations to help make it an annual tradition.

500 meals being prepped and delivered around the city today by @albanypolice #ThanksgivingDay2019. #equinox @WNYT pic.twitter.com/uxQ6fl1xU1

Steve Smith goes on to say, “Over the last few years, we’ve been trying to build relationships with our community. This is just another example of us trying to do that. We’re going to be out there today, just giving a hand to people who may otherwise not have a great Thanksgiving.”

He continues, “We get to really engage with people, get inside their homes, share a few laughs, and provide them with a Thanksgiving meal.” Sounds like they just love giving back to their community! God bless them.