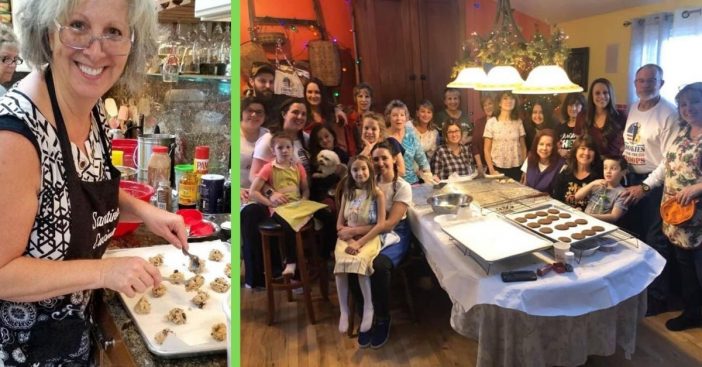 For one group of New Jersey friends, the end of Thanksgiving doesn’t mean the end of food prep. For the last 12 years, these Hackettstown natives have gathered together to continue a tradition in honor of a late friend. Santina Flynn originally came up with the practice. Her son, Justin, was in the Marines and she wanted to give him and other servicemen abroad a piece of home for the holidays. As a result, she began the practice of baking cookies for troops overseas.

Cookies for the Troops LLC started a volunteer tradition and grew into a business dedicated to preparing and sending care packages to soldiers who couldn’t be home for the holidays. Santina Flynn passed away this summer after a 5-year battle with breast cancer. But 25 of her friends are continuing with the tradition.

50 pounds of flour, 18 dozen eggs and 45 pounds of butter went into baking thousands of cookies. Jaclyne Franciscone, one of the bakers dedicated to this cause, told CBS News they bake fifteen varieties. They begin the Saturday after Thanksgiving. For context, in just one day the group of volunteers baked 3,694 cookies. They are determined to give back to those risking their lives.

Joining these baked goods are various important care items. Boxes contain cookies, Santa hats, decorations, games, and toiletries. To keep up their productivity, the volunteers form an assembly line to load up each box and keep production flowing.

They devotedly carry on a noble tradition

Flynn’s husband and son joined the bakers. They make up the growing number of volunteers flocking to participate in this endeavor. This year is particularly meaningful to them all because it is everyone’s first year without Santina Flynn by their side.

To try and boost their morale and honor their late friend and devoted founder of this project. volunteers added something special to the care packages. Now, each box contains a picture of Flynn baking next to a plate of cookies. Troops can open their boxes with these festive treats from home and see the woman who wanted to bring them some cheer wherever they were.