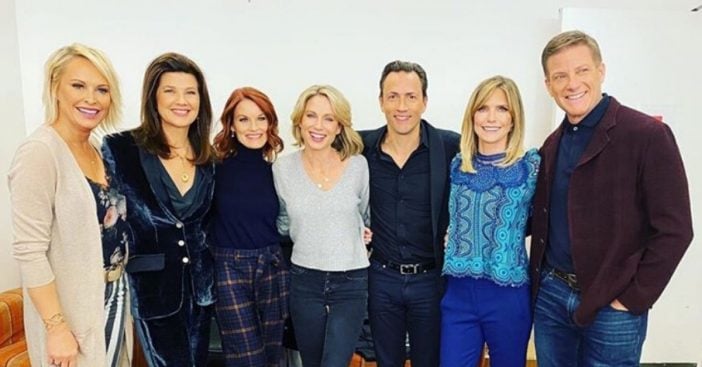 Six actors from the ’90s drama Melrose Place recently reunited in New York City for an upcoming interview. The interview will be televised this month on Good Morning America. Laura Leighton, Doug Savant, Andrew Shue, Daphne Zuniga, Courtney Thorne-Smith and Josie Bissett met for dinner at the Polo Bar to celebrate before the interview.

Many of the stars posted photos of the reunion on Instagram. Daphne posted a group selfie and captioned the photo, “Ran into some friends in New York! #melroseplace #nyc #friends4ever.”
Melrose Place is a spin-off of Beverly Hills, 90210. It was on television until 1999 and followed young adults who lived in a complex called Melrose Place in West Hollywood, California.

The cast met up for a new interview about ‘Melrose Place’

The actors were in town to film an upcoming interview on Good Morning America. In addition, ABC’s 20/20 anchor Amy Robach posted a photo of the group. She is married to Andrew Shue from the show.

RELATED: A Revival Of ‘Beverly Hills, 90210’ Is Coming To TV But With A Big Twist

Josie Bissett also posted a cast photo and wrote, “Can hardly wait to see this gang in #NYC tonight! Tomorrow we will be taping an interview on (Airs Dec 9th, I think).” She tagged the entire cast as well. She also tagged Heather Locklear, Thomas Calabro, Grant Show, and Marcia Cross and wrote that they could not make the interview.

The interview should air sometime next month (December 9, if Josie is correct!). Are you excited for the interview? If you loved the show, reminisce and watch the video below when the cast reunited about seven years ago!