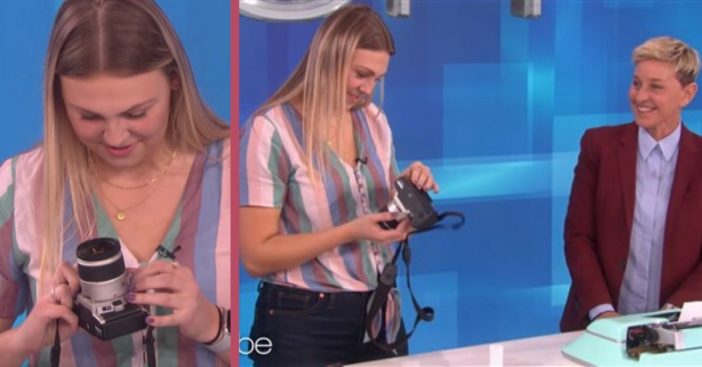 Ellen Degeneres has basically started the Millennial Challenge singlehandedly and it’s pretty hilarious (even for a millennial like me) to watch! Ellen has been challenging millennials to use things that have since gone pretty obsolete, such as a rotary phone and a road map. One of the newest ones is loading a 35mm film camera and 22-year-old Ariana Whitmarsh has redeemed her generation!

What do a boombox, a typewriter, and a 35mm film camera have in common?

Ellen would challenge Ariana to specifically find the National Public Radio station on the boombox. Then, load the typewriter with paper and type the lyric “I like big butts and I cannot lie,” then put the film in the camera and take a selfie. “I’m going to time you, and if you win, nothing happens,” Ellen says, followed by laughs from the audience.

RELATED: 10 Pieces Of ‘Junk’ You Might Have In The Attic That Could Be Valuable Antiques

It takes Ariana over 30 seconds to figure out how to turn on the boombox. She even had to maneuver the antenna a bit, but soon figured it out. Next, the typewriter, which she had a much better start with in loading the paper. She managed to type the lyric, which she briefly forgets, but soon remembers. She succeeds even though one of the words was cut off by typing too close to the edge of the page. Oops!

Most millennials have probably never used them…

Then, it comes down to loading the camera. Ariana immediately tears the film and Ellen just stood by watching and what Ariana was trying to do. Ariana thinks she has all figured out, but Ellen watches nearby not so sure Ariana knows what she’s doing. “This is really embarrassing,” Ariana admits as she tries to load the camera with damaged film.

Despite struggling with the challenge, Ariana did walk away with a few prizes. An iPad and, ironically nostalgic, a VCR! Watch the entire video of the challenge below, it’s too funny! (To be fair, I probably wouldn’t know how to use many of these old-school items either.)