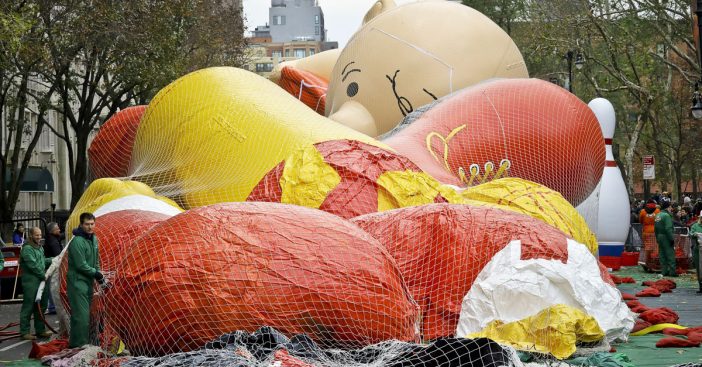 Whether you spend the day at home or head over to a relative’s, chances are before the TV starts playing football it has the Macy’s Thanksgiving Parade on. Since 1924, the Macy’s Thanksgiving Parade captivated audiences with stunning performances and awe-inspiring balloons. This parade has become synonymous with the autumn holiday. Each year, excitement mounts to see what floats are appearing and what they represent.

This year, however, those iconic floats may not appear on the streets of the Big Apple. New York’s regulations prohibit flying them if sustained winds exceed 23 mph and gusts exceed 34 mph. Currently, the National Weather Service anticipates sustained winds of 22 mph on Thanksgiving day. While these do not exceed the regulatory limit, the anticipated gusts of 39 mph do.

2019 marks the 87th Thanksgiving Parade hosted by Macy’s. The last time floats had to be grounded was 1971. That year, wind gusts reached 40 mph. This combined with a severe downpour during the parade, resulting in floats being grounded.

It wasn’t until years later that regulations tightened further still. In 1997, a Cat in the Hat balloon got caught up in winds, hit a lamp post on Central Park West, and injured four people. One woman caught in the accident was in a coma for 24 days. She reached a settlement with the city and Macy’s in 2001, but the incident itself immediately induced tighter regulations concerning wind speeds and balloon sizes.

This year promises many exciting sights to behold

Ideally, the balloons can continue to fly this year in a perfectly safe manner. We will have to wait for Thursday, when the final decision about the lineup will likely be made because of how volatile the weather can be. Chris Vaccaro, spokesman for the National Weather Service, emphasized the importance of following procedure to have a safe parade this year. “Winds are going to be critical,” he stated. It is especially difficult to track because of the “canyon effect” the tall buildings give the area. Joe Picca, a meteorologist at the Weather Service, says the buildings along the parade route mimick a tunnel. This makes the winds especially temperamental.

There has been a lot of news about the various floats the Macy’s Thanksgiving Parade will host this year. Snoopy from “Peanuts” is a timeless favorite, appearing in 40 parades since his debut in 1968.  This year, he shall appear as an astronaut. Joining the Peanuts Gallery’s favorite dog will be floats representing Green Eggs and Ham and Paw Patrol. Olaf from Frozen can safely join New Yorkers in the anticipated 40-degree morning without worrying about melting. Dreamwork’s Trolls add a burst of color to the festivities while Pikachu electrifies the scene. The Elf on the Shelf and the Nutracker add the Christmas spirit early on. With these and many more gorgeous balloons planned, we hope conditions stay safe so we can enjoy them all. On Wednesday, they shall be inflated as we wait to see what news the winds will bring for this iconic tradition.

Click for next Article
Previous article: ‘I Dream Of Jeannie’ Star Barbara Eden Thinks Reboot Is A “Good Idea”
Next Post: Most People Can’t Afford To Keep Their ‘HGTV Dream Home’ After They Win