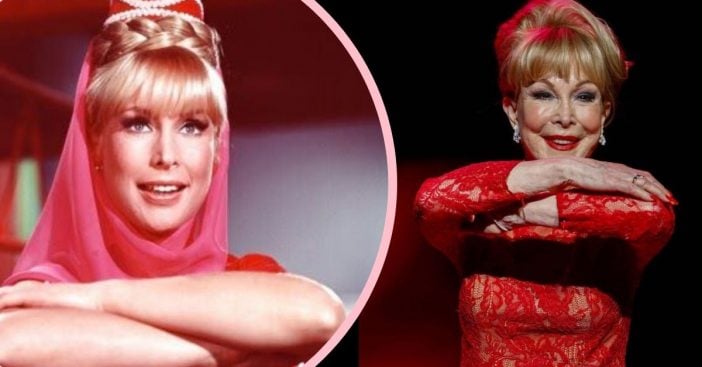 Well, it turns out that the legendary Barbara Eden is okay with an I Dream of Jeannie reboot, even if it doesn’t include her. “It would have to be different,” she tells PEOPLE magazine.  “I don’t think you’d ever copy something, but it’s a good idea.”

The beloved show ran from September 18, 1965, to May 26, 1970, with new episodes and through September 1970 with reruns. Eden would star alongside Larry Hagman as we watch their relationship blossom. Eden also shares a piece of advice she would give to a new, modern-day Jeannie. She says, “Just follow your own road. Do what you’re comfortable doing. You find your own truth.”

An ‘I Dream of Jeannie’ Reboot – Yay or nay?

Eden says she still has fond memories of her co-star, Larry Hagman. He died back in 2012 at age 81. “I have never worked with anyone before or since, that we just had a connection and a rhythm of working,” she reveals. “It was wonderful.”

Eden also talks about her secrets to looking and feeling youthful, even at age 88! She says that wine and chocolate are her guilty pleasures, but she enjoys working out for some extra activity. “I go to the gym, and I have a trainer,” she says. “It used to be spinning. I don’t do that anymore. I stopped that. I loved it but it’s not good for your knees so I stopped. Now I do weights and I walk around a track.”

How she feels about her role today

Eden also tells news outlets that to this day, she is still incredibly grateful to have a magical alter ego. She stresses that she never felt ‘typecast’ because of her success in the role. “Because after I did ‘I Dream of Jeannie,’ I did at least two other television shows. And I don’t know how many television movies playing entirely different kinds of people. I was so busy.”

She continues, “So, I didn’t feel that I was ever typecast. In fact, I wasn’t. ‘Jeannie’ just so happens to be one people remember and that’s all right with me.”

Just four years ago was the 50th anniversary of the show. Check out the interview below from when Eden talks about secrets and fun facts from the show and more! We’re excited to see if a reboot ever takes off from this show.

Click for next Article
Previous article: Check Your Pantry And Fridge For These Recalled Foods Before Thanksgiving Day
Next Post: Iconic Macy’s Thanksgiving Parade Balloons May Not Fly Due To Weather