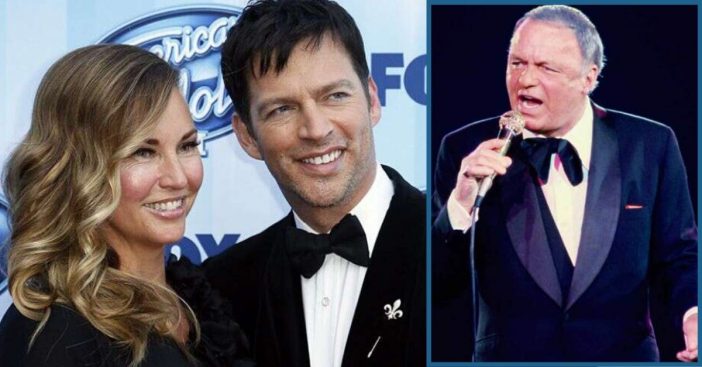 Singer Harry Connick Jr. has recently revealed that he and his wife, Jill Goodacre, had a “completely inappropriate” encounter with the great Frank Sinatra. Connick Jr. opens up on the U.K. show This Morning about the first time he met his idol and it did not go well at all. Sinatra apparently kissed Connick Jr.’s wife “right on the mouth” back in the ’90s when they first met.

“He looked at [her] and kind of placed her face in his hands and said, ‘You’re beautiful,’ and he kissed her right on the mouth, walked out of the elevator and that was the end of that,” Connick Jr. recalls. Sinatra would die just a few years later in 1998 at the age of 82.

So, how did it happen? Well, Connick Jr. and his wife (then-girlfriend) were attending an event that he was singing at, for Sinatra. He didn’t feel great about his performance and went to go explain himself to Sinatra. The couple would share an elevator with the legendary Sinatra, who ignored Connick Jr. and focused mainly on his date of the evening.

Years have passed since that encounter allegedly took place. Connick Jr. and Goodacre would marry in 1994. They have three daughters, Georgia, 23, Sarah, 22, and Charlotte, 17. Despite anything that Connick Jr. claims happened, the couple looks back on the situation with a laugh.

They laugh about the situation years later

“I never got to sing for him again, she loves to remind me of that story,” Connick Jr. says of his wife. “I think it was probably unacceptable then, but it was a situation where it was an interesting thing — I think because of my affection for him, in the context, she thought it was hilarious. But obviously it’s completely inappropriate.”

The couple share an unbreakable bond and relationship. Back in 2017, they tell PEOPLE about their relationship and its strengthening during his wife’s five-year battle with breast cancer. “She’s my best friend, and I really don’t know what I would do without her,” he says. “I think one of the reasons we’ve lasted this long is that we’re so aligned in every way. We have the same morals, the same goals.”

Click for next Article
Previous article: Reba McEntire Is Going On Tour In Spring 2020 — Get The Dates Here
Next Post: Dwayne Johnson Sings ‘Moana’ Song For Child With Cancer