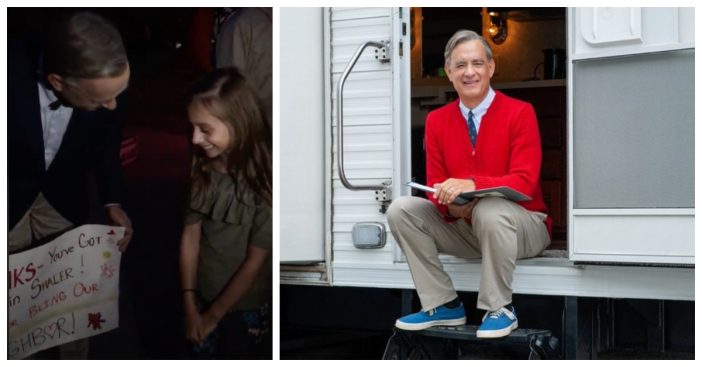 It was reported recently that Tom Hanks would be starring as the memorable and loving Mister Rogers in the upcoming movie You Are My Friend. The movie is to be focused on Rogers’ “unlikely friendship with award-winning journalist Tom Junod, who got to know the television personality while writing a 1998 profile on the star for Esquire magazine,” according to People.

With the onset of this news, a video of Tom Hanks surfaced where he is singing the classic Mister Rogers song “It’s Such a Good Feeling” to a group of kids and their parents. In the video, Hanks is holding a sign that was made for him by a young girl. It’s really a tear-jerker.

Tom Hanks visited a city called Shaler Township, where he shared a special moment with a young girl named Evie. The sign he was holding, given to him by Evie herself, said that he has a friend in Shaler. It was after that moment that Hanks led the group of kids and their parents in song, which was Mister Rogers Neighborhood’s iconic closing tune.

Towards the end of the song, Hanks shook the hands of all the kids and parents and even gave some hugs, too! It was easily the most wholesome thing to grace the Internet since the very first image was released of Hanks dressed as Mister Rogers.

The movie, which is set for release in October 2019, was announced just a little over a week ago. Director Marielle Heller has spoken up in multiple statements about the upcoming film and how important it is that this revival is happening.

“It’s a story for our times, a story about kindness and family connection and trying to tap into our better self. God knows we need that right now! In the research for the movie, the writers found that more people than they could possibly count credited Mr. Rogers with changing their lives…. [It’s about] one man who’s in a critical point in his life — becoming a new father, having issues with his own father — and meeting Mr. Rogers to write a piece about him, thinking it’s going to be a bit of a puff piece, but it ends up changing his entire life,” Heller commented to Entertainment Weekly.

One thing we all know for sure is that Tom Hanks is literally Mister Rogers and you can’t not love him. We’re so excited to see the new movie!

Please SHARE this article to spread more wholesome goodness to others. Be sure to watch the full video below… and grab your tissues!