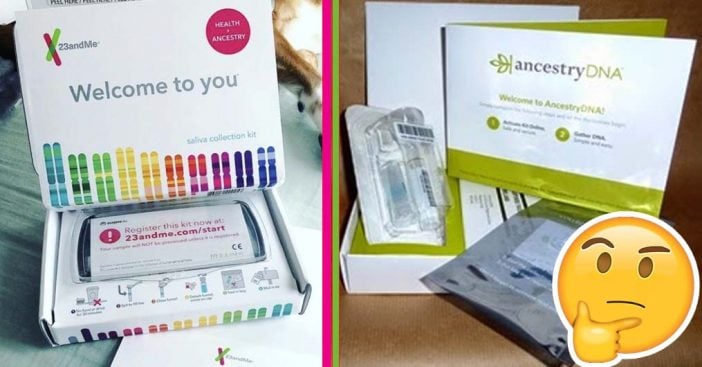 You know Ancestry.com and 23andMe, which both determine your ancestry line and DNA through genetic testing? It’s pretty amazing to go back in time and find out where your true roots are from, but reports are now showing that these DNA tests are actually full of crap and you should stop wasting your money on them.

A new episode of CBC’s Marketplace has confirmed that the accuracy of these tests is misrepresented. The host of the show Charlsie Agro and her identical twin sister both sent individual DNA samples to five of the top ancestry testing companies and both received wildly different results.

Since the twins’ results were incredibly different from one DNA test to another, they sought out second opinions from geneticists and biologists who all had the same response; that these DNA tests are really full of crap.

In the episode, you can see that the two twins receive wildly different heritage results from the exact same DNA test. So, why is it that a set of identical twins received such contrasting results? One geneticist from the episode of Marketplace had an explanation for that which exposes DNA tests for what they really are.

“Our entire DNA is made up of 3 billion parts. Ancestry companies though look at less than 1% of those, about 700,000 sections where they know there are slight differences or variants among humans. Then they compare the patterns of your differences to groups of people in their databases. And, with the help of math, they try to figure out which groups you most likely belong to,” the episode explains.

The geneticist also goes on to say that it is an ‘informed guess’ that ancestry companies are making, meaning that these results are never 100% accurate.

Since we now know these DNA tests are basically a sham, why do people still buy them? The answer to that is because everyone wants to know what their ancestry history is and these companies advertise themselves to be 100% scientifically accurate, which they are not. Otherwise, they wouldn’t be able to make a profit if their company wasn’t advertised as such.

These companies keep a lot of important info from their customers, including the fact that your results don’t stay the same as the company updates their databases, meaning they could change at any time. So, do you really know for sure what your ancestry is? Not so much.

Be sure to SHARE this article to spread awareness about these DNA tests.

Check out the full episode of Marketplace below:

Previous article: 5 Space-Saving Ideas Inspired By Tiny Homes
Next Post: Millennials Aren’t Doing This Nighttime Routine With Their Babies, But Science Says They Should