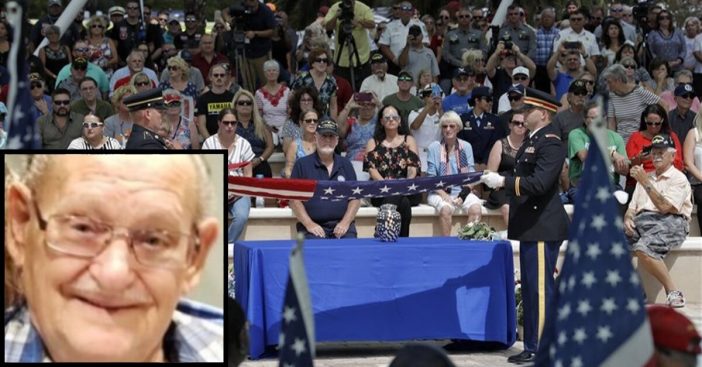 Hundreds of people have shown up to a funeral for a veteran who has no family, in Sarasota, FL. Edward K. Pearson is the name of the veteran who sadly passed away at 80 years old back on August 30th. For instance, reporters on social media shared the huge outcome for his funeral. He has the full support of so many people who wanted to honor this veteran.

One reporter, John Rogers, says, “HONORING A HERO! Look at that crowd! Hundreds are gathering in Sarasota to honor a veteran who died without any family. At this point, there’s still 30 min before the service starts!”

Hundreds support veteran with no family at his funeral

HONORING A HERO! Look at that crowd! Hundreds are gathering in Sarasota to honor a veteran who died without any family. At this point, there’s still 30 min before the service starts! https://t.co/aX2lg4Uumj pic.twitter.com/BGXyQzrCKS

Pearson had no immediate family to come to his funeral. Therefore, the public was welcome to attend and pay their respects. The service is on Tuesday, October 1st, at 12:30 p.m. at the Sarasota National Cemetery.

Pearson served in the U.S. Army from February 1962 to February 1964. Legacy Options Funeral Director Michael Hoyt was the one who organized the public service for the veteran. “He served his country and I know he doesn’t have any immediate family. And doing the right thing for a veteran that served our family was the right thing to do.”

Hoyt goes on to say that shows human nature and how we truly all care for one another. He says that it shows that we, as humans, don’t just care about ourselves. Moreover, we will go out of our own way, especially to support those who serve us and allow us our freedoms.

Take a look at the official news coverage from the funeral service below. Subsequently, many people have already sounded off in the comments section of the video, also paying their respects. “Thank you, servicemen and women and Veterans for your serving our country,” one person comments. In conclusion, be sure to leave your respects as well!

82-Year-Old Prankster Passes Away, Then His Family Writes A Hilarious Obituary As A Send-Off.

Click for next Article
Previous article: An Elvis Classic Is Adorably Mastered By This Talented Two-Year-Old
Next Post: Queen Elizabeth II And Prince Philip Share A Bed On One Occasion