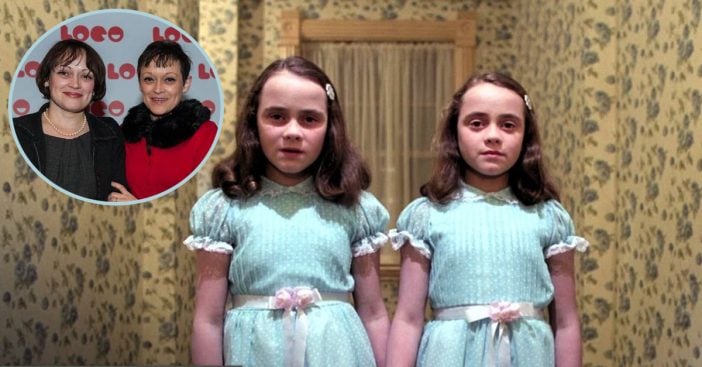 Based on the 1977 book by the master of scares Stephen King, The Shining brings cabin fever to a whole new level. Multiple adaptations exist, but the one that easily comes to everyone’s mind is the 1980 psychological horror film starring Jack Nicholson, Shelley Duvall, Scatman Crothers, and Danny Lloyd. Many scenes from that movie are still referenced in modern media. One iconic feature of the film includes the scary twins who appear ominously in the Overlook Hotel. The Shining twins had a steady, threatening scare that was at odds with their young age. Years later, they have abandoned haunting abandoned hallways in favor of a more approachable lifestyle.

The Burns sisters played The Shining twins. However, the Grady girls in the movie were supposed to be 8 and 10. But since the actresses are twins, the characters they played were presumed to be as well. Years ago, they captured that eerie aura of vengeful spirits too well to pass them by.

Fortunately, the Burns sisters are not playing a role in the psychological downfall of a writer. These days, they can actually be found on Twitter. They share a joint account and Lisa Grady has her own solo one as well. They even help fans identify them from their appearance in The Shining. Louise Burns stated in a tweet, “The clue is in the chin.” They further informed fans Lisa is on the left in the movie photo.

Outside of social media, the still sisters reminisce about the movie. Together they attended the 50th-anniversary screening of Stanley Kubrick’s Dr. Strangelove. As Kubrick also directed The Shining, it was quite the reunion.

A turbulent ride for characters and actors

The Shining was just as intense for the actors to film as it was for viewers to watch. Some of their worries did not come from expected places, however. Actually, acting in a psychological horror would not be so bad if the weather were simply nicer. In an interview with The Daily Mail, The Shining twins themselves shared some on-set insight. They recalled, “I remember being worried, not because of the blood, but because it was going to be cold. Stanley was such a perfectionist and had planned exactly how he was going to pour the blood over us, so our main concern was just staying really, really still.”

The pair have great memories overall from the filming of the movie though, noting how great Nicholson was to work with. He’s famously known as a very intense method actor, but nonetheless, he took the team to become friendly with the young girls and make them feel comfortable.

It takes a special mind to bring King’s book to life. Neither Lisa nor Louise seemed to mind, however. In fact, when discussing working with Kubrick they said, “We loved it. Every day felt like we’d been invited to a very exclusive party and we were the youngest, luckiest people to be there.” The twins continue to attend horror conventions, meeting fans of the beloved horror flick. Since leaving Hollywood behind, they both have taken on their own careers. Louise became a microbiologist and Lisa went on to become a lawyer.

Nine Popular Movies That Have Crazy Titles In Other Countries.