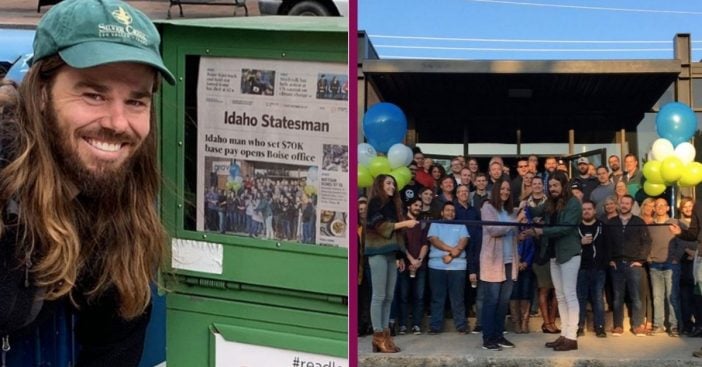 Dan Price is the CEO of Gravity Payments. He cut his own salary in 2015 to help boost his company’s minimum salary to $70,000 a year. This was for his Seattle office. Price flew into his Boise office to make a visit and announce something pretty incredible along with it. He announces that he was giving all employees (under the current minimum salary) a $10k raise. Dan says he also plans to raise their minimum wage to $70,000 by 2024.

He announces the exciting venture on Twitter as well, saying, “This morning we cut the ribbon on the new @GravityPymts Boise office AND announced that all of our employees here will start earning our $70k min salary. I’m so grateful to work with this amazing team and to be able to compensate them for the value they bring to our community.”

This morning we cut the ribbon on the new @GravityPymts Boise office AND announced that all of our employees here will start earning our $70k min salary.

I’m so grateful to work with this amazing team and to be able to compensate them for the value they bring to our community. pic.twitter.com/stwwJgYCqQ

Gravity Payments acquired Idaho company ChargeItPro, and it’s their Boise, ID office that got the recent raise. A majority of those employees were making less than $30,000 before Dan’s pay increase. As previously mentioned, Dan isn’t new to this sort of thing. He did it with his original Seattle office in 2015. He cut his own $1 million salary by 90% so that his employees could earn a minimum wage of $70k.

“I’m sick of being part of the problem, I want to be part of the solution,” Dan says to ABC News at the time in 2015. “Previously, I was making a million dollars a year and people working for me were making $30,000 a year and that’s wrong, I was feeding into the problem.”

He says doing this is worth it

In a post on Instagram recently, Dan even said that him giving up his million-dollar salary was not an “unreasonable sacrifice.”

“A lot of people think giving up a million dollar a year salary and millions in profit is an unreasonable sacrifice to pay a living wage and give small businesses white-glove service,” he says. “Well, I am proof of one thing. It is worth it.”

Those in the Idaho office already see a significant benefit

The employees from the Idaho office were incredibly thrilled at the pay raise. Dan says he already hears about how much this change has benefitted their lives. “I heard from somebody who was a single parent,” he tells ABC News. “That they were not necessarily going to need to work two jobs anymore and they were going to be a better parent.”

It sounds like what Dan is doing is really significantly helping the lives of his employees. Bless him!

Speaking of the minimum wage, McDonald’s Workers Go On Strike To Protest Pay Below Living Wage.