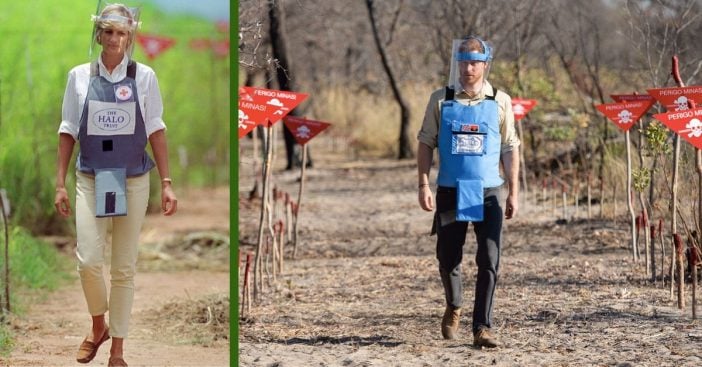 Just 22 years after Princess Diana did a walkthrough of a landmine, Prince Harry is now continuing her legacy. He is clearing out dangerous landmines around the world. He’s been on a royal tour of Africa. On his fifth day there, he visited a HALO Trust mine outside Dirico in Angola. Prince Harry met with community members to teach them about how de-mining efforts are benefitting the local population.

He also remotely detonated a mine while there. Prince Harry also gives a speech on the importance of clearing these dangerous landmines to help conservation and humanitarian efforts.

Prince Harry says in his speech, “This historic commitment is a key step forward for the movement to rid the world of mines and lay the foundation for a safe and just future for the next generation.” He continues, “Landmines are an unhealed scar of war. By clearing the landmines, we can help this community find peace, and with peace comes opportunity.”

“Later today I will visit Huambo, to see the place where my mother walked through a minefield in 1997. Once heavily mined, the second city of Angola is now safe,” Prince Harry adds.

An important quote by the late Princess Diana

Prince Harry’s visit is a reminder of the work that the late Princess Diana embarked on. She walks through a landmine filed with similar warning signs in Huambo, wearing protective clothing and a visor. She also met with landmine survivors and community members to raise awareness on the issue of landmines, similar to what Prince Harry is now doing as well.

This event is now on the official Instagram for Duke and Duchess of Sussex. It includes a quote from Diana from when she visited the landmine site in 1997. The quote says, “If an international ban on mines can be secured it means, looking far ahead, that the world may be a safer place for this generation’s grandchildren.”

The palace releases a statement on Prince Harry’s visit to the landmine. “The Duke is humbled to be visiting a place and a community that was so special to his mother, and to recognize her tireless mission as an advocate for all those she felt needed her voice the most, even if the issue was not universally popular.”

Princess Diana Comforts A Woman Crying At Her Dead Son’s Grave Weeks Before Her Own Tragic Death.