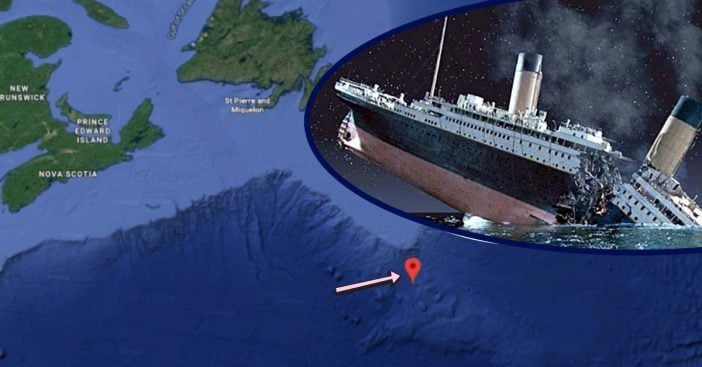 *FAQs at the bottom of article*

It appears that Google Maps can officially reveal the exact location where the Titanic ship sank in 1912. The ship met its fate in the North Atlantic Ocean on April 14th, 1912, and more than 1,500 passengers and crew members died as a result. The RMS Titanic went down after crashing into an iceberg, and only the luckiest were able to secure a spot on a lifeboat.

The ship was the largest vessel afloat at the time, with a maiden voyage from Southampton to New York City. Now, Google Maps lets any user in the world view the exact spot that the Titanic went down. The coordinates reveal just how close they were to reaching their destination. How different life would be if they had made it!

In addition to using Google Maps to pinpoint the exact location, you can also use Google Earth, which gives you beautiful satellite imagery. Using Google Earth, I typed in the coordinates 41.7325° N, 49.9469° W and it took me directly to the location where the Titanic sank.

With all of this information in mind, it’s important to note that the Titanic was 715 miles from the port of Halifax and 1,250 miles from New York. The ship was slated to dock at New York just three days after the sinking took place. So, what was Ballard doing there in the first place where he was able to get these amazing photos?

He was actually looking for the USS Thresh and USS Scorpion, two nuclear subs that sank in the 1960s. “They did not want the world to know that, so I had to have a cover story,” he explained. He also said he had always wanted to find the Titanic wreckage, but it had been too expensive of an expedition. Eventually, the US Navy gave him the money for it, and discovered not only those nuclear subs but the Titanic wreckage as well before the Russians.

Ballard said he recalls being super excited by the findings of the Titanic wreckage, but then the mood turned pretty somber pretty quickly.

“We realized we were dancing on someone’s grave, and we were embarrassed. The mood, it was like someone took a wall switch and went click,” he explained, “And we became sober, calm, respectful, and we made a promise to never take anything from that ship, and to treat it with great respect.”

Be sure to SHARE this article if you found this information interesting! Don’t forget to try out the coordinates on your Google Maps or Google Earth settings.

Check out the video below of a CGI interpretation of how the Titanic sank:

Can you visit the Titanic?

The Titanic Expeditions with Oceangate began back in June 2022, allowing people to pay $250,000 to dive down to the Ocean’s surface to check out the Titanic wreckage in person. For that summer alone, they went on eight separate missions to the ocean floor to visit the Titanic.

Can you see where the Titanic sank on Google Maps?

It is impossible to see where the Titanic sank on Google Maps. This is due to the fact that the wreckage lies at a depth of about 12,500 feet.

Did the Titanic sink in 2 hours or 5 minutes?

Previous article: Cindy Williams And Penny Marshall Always Laughed Together Despite Rocky Relationship
Next Post: ‘Little House On The Prairie’ Cast Then And Now 2023