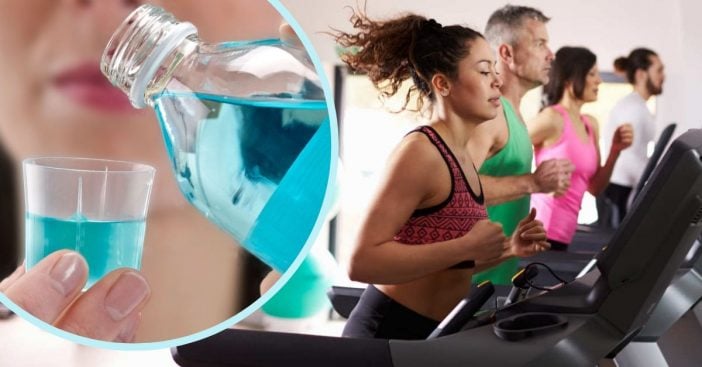 New studies about how mouthwash can affect the benefits of exercise are surfacing and making us all scratch our heads! It turns out that mouthwash can prevent exercise from lowering your blood pressure. This really gives insight into just how important the bacteria living in our mouths really are!

Study author Raul Bescos and his team weren’t interested in studying the effects of mouthwash by itself. Of course, once they realized the multitude of research behind this theory, they were shocked at what they found!

Mouthwash may do away with the benefits of exercise

Exercise is known to dilate our blood vessels by getting our bodies to produce more nitric oxide. However, even after we’re done with our workout, our blood pressure remains lower than it used to be for quite a few hours. This is known as post-exercise hypotension. Bescos and his team have a theory that involves the natural microbial environment of our mouths.

Gizmodo explains it best. “A byproduct of nitric oxide, called nitrate, is often gobbled up by certain mouth bacteria. These bacteria then process nitrate into another chemical called nitrite, which is absorbed into the body when we swallow saliva, and some of it is again turned back into nitric oxide. They theorized that this process gets enough nitric oxide back into our bloodstream where it helps keep our blood pressure low.”

This is when they use mouthwash to test out the theory. “We used this approach because we had evidence that it was an effective method to inhibit the activity of oral bacteria, and more particularly the nitrite synthesis in the mouth,” Bescos explains.

The team oversees 23 healthy adults for this experiment. They had the adults run on a treadmill for 30 minutes on 2 different occasions, then had their blood pressure monitored for 2 hours. During those 2 hours, they would take a swig of mouthwash or a placebo.

The data may be worth further studies in other areas

People who take the mouthwash find that their blood pressure had not lowered by much. By the two-hour mark, the post-exercise effect disappears completely. In conclusion, it seems to reduce the body’s ability to produce nitrite, brought on by the mouthwash taken.

Going even further, it’s worth giving this study another look. The whole spectrum of this study is much broader than it looks. For example, those with high blood pressure might be more likely to have gum disease. This can affect their oral microbiome. Other research also suggests that mouthwash raises blood pressure in some people after the fact. It’s worth seeing where else this study leads to!

What an interesting study!

A fascinating study says that horns are growing on young people’s skulls from too much phone use!