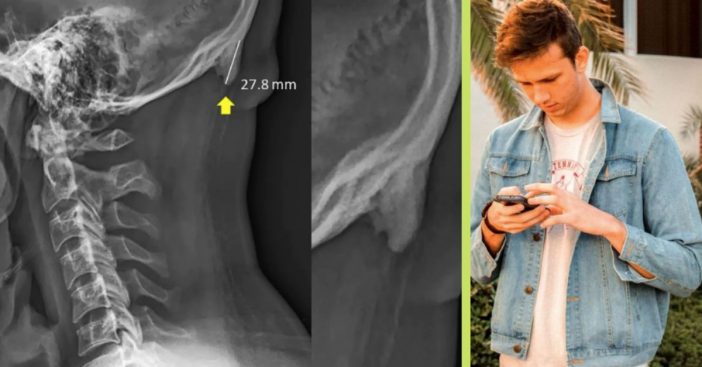 Before you freak out and say “this can’t be right,” don’t worry. You’re not going to wake up one day with horns on your head. Researchers at the University of the Sunshine Coast in Queensland, Australia have found that excessive phone use could alter our physiology. With this being said, they’re seeing horn-like spurs develop on younger adults towards the back of the skull.

This is because mobile users are tilting their heads forward to see their phone screen. This shifts the weight of the head from the spine to the muscles in the back of the head. This causes bones to grow in the tendons and ligaments. As a result, you get these horn-like spurs.

What the experts have to say about these “horns”

Scientists say, “Our findings raise a concern about the future musculoskeletal health of the young adult population and reinforce the need for prevention intervention through posture improvement education.”

The study looks at 1,200 X-rays taken in Queensland covering a variety of ages. One-third of those showed the bone spur. The frequency of it decreased with age and larger spurs were more prominent in younger people. This makes sense since the younger generation definitely uses their phone much more!

The overuse of mobile devices has been widely criticized for ages now. Many have believed that the overuse of phones can lead to health issues. This is the first time we’ve seen the human body change and adapt to cell phone usage.

Scientists continue, “An important question is what the future holds for the young adult populations in our study, when development of a degenerative process is evident in such an early stage of their lives?”

For those who are legitimately worried about the effects of mobile devices on the body, not to worry! Experts say that if you run your hand over the lower rear part of your skull, you can likely feel if you’ve got a horn growing or not. And even if you have a minor one, it doesn’t appear to cause any pain or other medical problems (as they have not been disclosed).

Next time your teenager won’t put their phone down, just show them this! It might scare them out of using their devices so much.

Speaking of cell phones, Hulk star Lou Ferrigno has called out people who use their phones at the gym excessively!

Take a look at what he has to say to those people.

Previous article: See What The Beatles’ Kids Are Doing These Days
Next Post: A 150-Year-Old Bible Once Belonging To Abraham Lincoln Shed’s Light On His Religious Beliefs