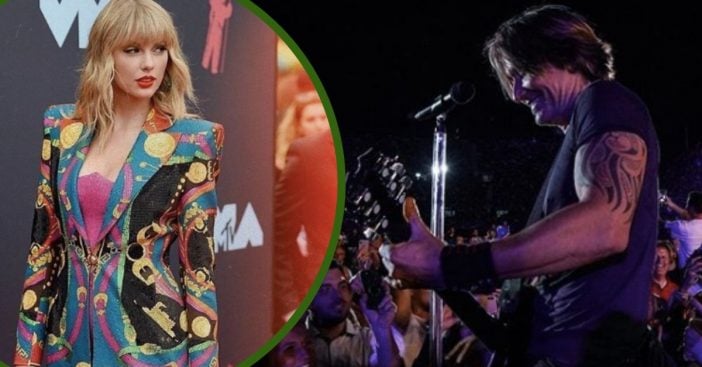 We love celebrities supporting other celebrities’ work! Keith Urban recently posted a video of he and his band covering Taylor Swift’s newest song “Lover.” He performs it while doing a show at the Washington State Fair. He makes sure to credit Swift in the Instagram caption, praising her work as well.

“Every now and then you hear a song that you love and wish you’d written…. and a HUGE thx to my band as well- we didn’t get to rehearse so…. this is us fully winging it,” he says.

For not being able to rehearse with his band on this tune, they all sound pretty amazing! The 29-year-old “Lover” singer couldn’t get over the fact that Urban had covered one of her songs. She shared the video to her Instagram story with pure excitement. “Keith Urban covering ‘Lover’ flawlessly,” she writes. “I am screaming. This is so beautiful.”

Swift’s song “Lover” was just released recently along with an entire studio album of the same name on August 23rd. According to Billboard, the new album earns more sales in its first five days than any album released since her own previous album in 2017.

Moreover, Billboard reports that Lover is expected to claim the No. 1 spot on the charts to secure Swift’s sixth No. 1 album. How exciting! Of course, fans were quick to take to the comment section to talk about the cover. One person says, “Amazing concert!! ❤️❤️❤️ just didn’t last long enough! 😊 Come back soon! Loved when you signed and gave your guitar to the young girl, agree we need more girls playing!!”

Another says, “As a swiftie and a KU fan, this cover is a sweet, sweet treat ❤️.” Sounds like the fans really loved this one! Maybe we’ll get a collaboration from Swift and Urban in the near future and take the 29-year-old singer back to her roots?

Watch the actual music video for “Lover” below

Prior to Lover being released in August, Swift also releases the songs  “The Archer,” “ME!” and “You Need to Calm Down” from the album. As a result, she earns 12 MTV Video Music Award nominations and takes home the award for video of the year. Sounds like she’s been having quite the year, and now Keith Urban covers her song!

Speaking of Keith Urban, check out this hilarious story. One woman pays it forward for a man checking out his groceries, then realizes it’s Keith Urban! Take a look!