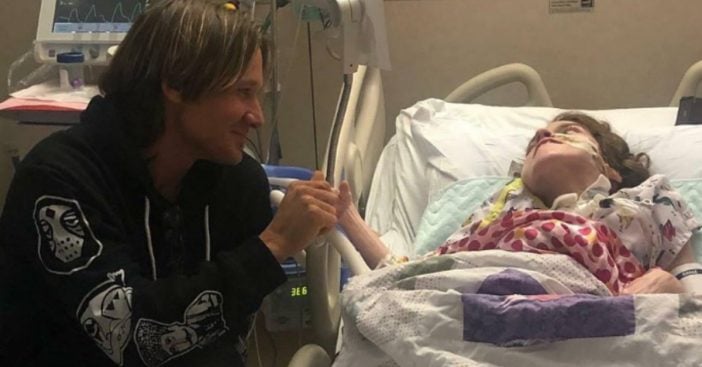 Keith Urban is undoubtedly one of the most respected and kindest musicians out there. He may have just outdone himself with his latest act of kindness, though. Marrisa English, 25, has been dealing with a number of health issues including cerebral palsy and scoliosis. Despite this, it was important for her to see Keith Urban live in concert in Toledo, Ohio, which she had tickets for.

However, her health is rapidly deteriorating and will soon be placed in hospice care. Due to this unfortunate news, she was not able to attend the show. Marissa’s nurses kickstarted a social media campaign to bring the country star to St. Vincent’s Hospital or at least FaceTime with her. He didn’t just do that, he went above and beyond.

The country singer eventually saw the messages on social media and took it upon himself to visit the hospital. He spent some time talking to her and evening sang one of his songs “Blue Ain’t Your Color” by her bedside, which was one of her favorite Keith Urban songs.

Urban held Marissa’s hand as he serenaded her and it was very clear she was in awe and so ridiculously happy. One of the hospital nurses posted the video on Facebook with the caption, “Keith Urban made a visit to see Marissa tonight and serenaded her at Mercy Children’s Hospital. I love that her dream came true because this chick deserves it more than anyone I know!”

Some of Marissa’s family and the ICU nurses attended Keith’s concert that night where he mentioned Marissa to the crowd. He had told his fans that he had met “a beautiful girl named Marissa,” and that he truly thought she was “my biggest fan.” He even dedicated the entire Toledo show to Marissa.

Marissa’s mother shared some funny memories about Marissa’s fascination and admiration for Keith Urban. According to her mom, she has a Keith Urban tour t-shirt wrapped around one of her pillows. “It’s actually cute because she’ll pick up the pillow and hug it and kiss it… she’ll point at it and say ‘Mr. Hottie,'” her mom says. We don’t disagree!

This just proves that Keith Urban is one of the best and most genuine musicians out there.

Be sure to SHARE this article if you teared up at this heartwarming story.

If you love Keith Urban, you can watch one of his popular music videos below and sing along!

Previous article: Did You Watch The Biggest Cliffhanger In TV History – Who Shot J.R.?
Next Post: The Simple Item Queen Elizabeth II Uses To Fall Asleep