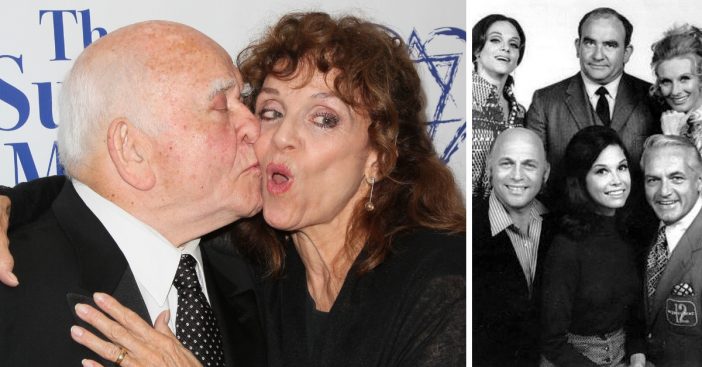 We have previously reported that Valerie Harper, best known for her roles on The Mary Tyler Moore Show and Rhoda is struggling with cancer. She is in the final stages and her husband has revealed that he will not be putting her into hospice care. Now, former co-star Ed Asner is reaching out with love and support.

Ed shared a tweet to send his love and support out to Valerie and her husband during this tough time. Ed is currently 89 and Valerie is 79. The pair worked together on The Mary Tyler Moore Show. He wrote, “My heart goes out to @ValerieHarper and her husband Tony. I hope you feel my love coming at you like a tidal wave.” Update: On Friday 8/30/2019 Valerie Harper Passed Away

While Valerie got her own spin-off series called Rhoda, Ed did as well. He starred in his own spinoff series called Lou Grant. He won seven Primetime Emmy Awards, the most that a male actor has ever won.

Ed tweeted his support after learning that Valerie’s husband, Tony, would not be putting her in hospice even with the recommendation from her doctor to do so. Tony shared a touching Facebook post where he explained his side.

My heart goes out to @ValerieHarper and her husband Tony. I hope you feel my love coming at you like a tidal wave.

“I have been told by doctors to put Val in Hospice care and I can’t [because of our 40 years of shared commitment to each other] and I won’t because of the amazing good deeds she has graced us with while she’s been here on earth,” he wrote in the post.

A friend of the couple had also started a GoFundMe page to help Tony pay for Valerie’s medical expenses. Fans, friends, and family raised thousands of dollars, but then the page was shut down. It was shut down because people in the entertainment industry decided to pay off her medical expenses so the page was no longer needed. How incredible to see people who love Valerie come together to help her.

According to PEOPLE, Tony expressed his gratitude by saying, “She did so much for so many people and once they heard what was happening, they all started coming forward. Never in my wildest dreams did I imagine it would happen like this. It’s really amazing.”

Several years ago Valerie opened up about her cancer battle

Back in 2015, Valerie spoke to PEOPLE about her life and her diagnosis.

She said, “I’m ready. I’m ready to go. Maybe that’s the secret. That I’m absolutely – I don’t want to, my God, I want to live to be 102, but I am not banking on anything, really, because we shouldn’t. We don’t know what’s around the corner. I think you just take each day and get the best out of it and do what you can and have fun.”

Click for next Article
Previous article: Disputed math problem. How Many Triangles Are There?
Next Post: Couple Updates Hairstyle Together And Fall In Love With Each Other All Over Again