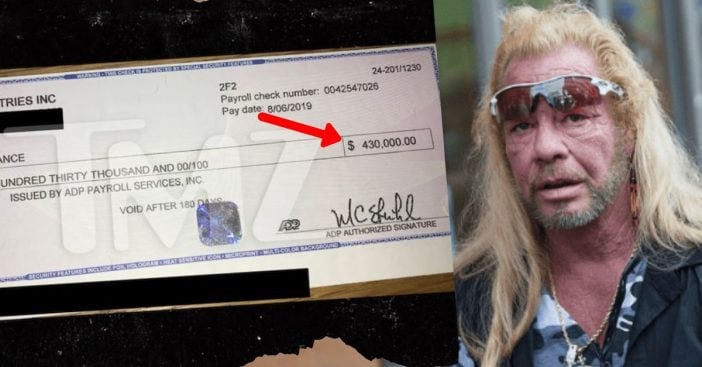 Duane ‘Dog’ Chapman just can’t catch a break these days following the death of his beloved wife, Beth Chapman. The bounty hunter was recently targeted in a $430,000 scam. He receives an email that appeared to be from United Arab Emirates Deputy Prime Minister Sheikh Mansour bin Zayed Al Nahyan.

The scammer was asking Dog to give a speech at a small business owners convention in Dubai for $430,000. The invitation alone seemed weird, and it gets even weirder.

All of the communication was done through email and then the scammer asks for $250,000 back as a “donation.” Additionally, the organizers ask for his manager’s personal bank account numbers. This made Dog completely give up on the deal, knowing something fishy was going on.

“If Dog had deposited the check, the funds would vanish from his account a few days later. So, if he’d sent back the $250k, it would’ve come out of his own pocket,” says TMZ, who originally reports the story.

Even though Dog dodged a serious bullet, other celebrities have fallen victim to this awful scam. Robert De Niro is one of them, who lost $1 million after art dealer Lawrence Salander didn’t pay out more than $1 million after selling his late father’s paintings. Kiefer Sutherland also loses out on $1.5 million after falling victim to a cattle investment scam.

Celebrities go through it, too! This comes just shortly after the news that somebody had broken into Dog’s Colorado store. The culprit had stolen tons of merchandise, including personal items that belonged to his late wife. Her personal items were at the Colorado store as part of a makeshift memorial for her.

Dog is also offering a “large cash reward” for any information towards who is responsible for the crime. He tweets it out to his following saying: “The Bible says it is an unforgivable sin to steal from the dead. LARGE CASH REWARD FOR ANY INFORMATION FIR WHO IS RESPONSIBLE FOR THIS !!!”

Fans are rallying with Dog and his family, lending their positive messages of hope. One person says on Twitter, “I’m so sorry that there are such evil people in the world! Loved you and Beth and all the kids! Hope she sends down a bolt of lighting to shoot these losers with! She’s a badass and I know she can do it! Love to you all.”

The Bible says it is an unforgivable sin to steal from the dead
LARGE CASH REWARD FOR ANY INFORMATION FIR WHO IS RESPONSIBLE FOR THIS !!! https://t.co/TEUKHjOkvH

We’re all praying for the Chapman family and hoping they can catch a break from this stress soon.

Speaking of bounty hunting, check out all the new details we have on their new show ‘Dog’s Most Wanted’.