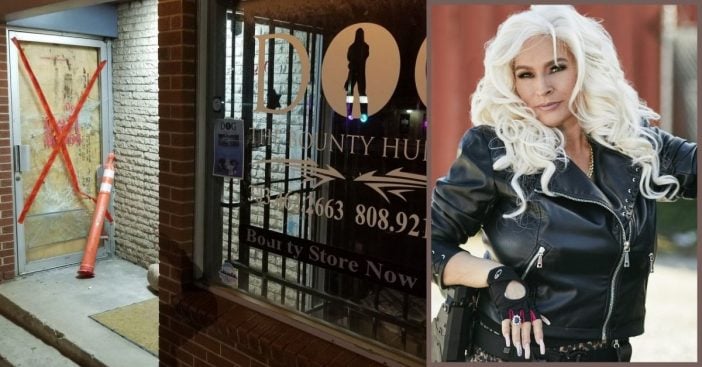 Dog the Bounty Hunter’s store in Colorado has been totally burglarized and his late wife Beth’s personal items are missing as well. Duane Chapman was notified Thursday night, August 1st, that a number of items from the family store had been stolen. Sources say a member of Dog’s team went to the store to handle some business when he discovers the ransacked store.

Sources confirm that thousands of dollars in clothing, including “Dog and Beth” merch from their various TV shows, had been stolen. Additionally, some of Beth’s personal items were stolen, such as a personal bounty hunting gear and personal family mementos.

These personal items of Beth’s were used for a makeshift memorial inside the store to honor her memory. The family is currently “distraught” over losing such meaningful items. Dog and the family are no strangers to keeping priceless mementos around. After the loss of the matriarch of the family, the whole family has kept all of her belongings as they were.

Dog has also been warning fans about fake merchandise being sold in addition to fake GoFundMe accounts targeting the following of Dog and Beth. Could these things have a connection into whoever robbed the Colorado store?

Dog is also offering a “large cash reward” for any information towards who is responsible for the crime. He tweets it out to his following saying: “The Bible says it is an unforgivable sin to steal from the dead. LARGE CASH REWARD FOR ANY INFORMATION FIR WHO IS RESPONSIBLE FOR THIS !!!”

Fans are rallying with Dog and his family, lending their positive messages of hope. One person says on Twitter, “I’m so sorry that there are such evil people in the world! Loved you and Beth and all the kids! Hope she sends down a bolt of lighting to shoot these losers with! She’s a badass and I know she can do it! Love to you all.”

The Bible says it is an unforgivable sin to steal from the dead
LARGE CASH REWARD FOR ANY INFORMATION FIR WHO IS RESPONSIBLE FOR THIS !!! https://t.co/TEUKHjOkvH

Another fan says, “So sorry to hear that this has happened to you & your family! You have endured so much! It is so sad that anyone could do this! I pray that you find them Dog! Sending lots of love!!!”

All of us at DYR deeply hope that Dog is able to recover the stolen items, especially the personal ones belonging to Beth.

Looks like this bounty hunt will be a personal one! Speaking of bounty hunting, check out all the new details we have on their new show ‘Dog’s Most Wanted’.