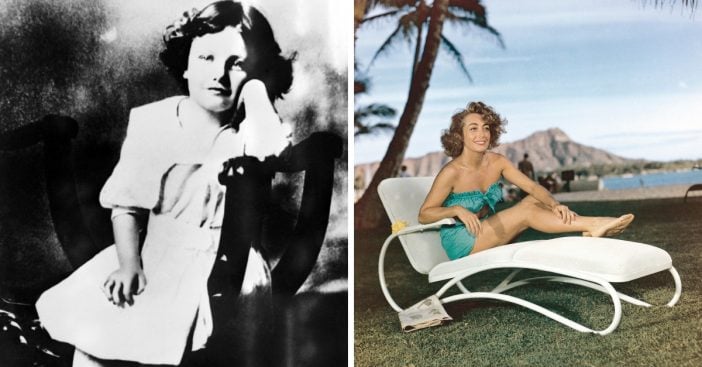 Joan Crawford just kept gaining popularity in the ’30s. Around the time, she also married her first husband Douglas Fairbanks, Jr. Although their marriage was short-lived, they became one of the most famous Hollywood “it couples” of that time period. She went on to marry three more men after Douglas and had four children altogether.

Joan had a love of dogs, especially dachshunds. Here is a photo of Crawford with two of her dachshunds, under a portrait of herself.

Here’s another rare photograph of Joan, this time in color! While her career took a dip in the ’40s, she continued acting well into the ’70s.

Here is a photo of Joan with all of her adopted children! Aren’t they cute?

Lastly, here’s a photo of Joan later in life. She still looks so glamorous. Which photo is your favorite of this bunch?

Learn more about the sad story that made Joan hide away from Hollywood!

Click for next Article
Page 2 of 2Page
Previous article: Lana Wood Still Pushing For Justice For Her Late Sister, Natalie Wood
Next Post: Burt Reynolds Suggested One Of The Best Lines In New Film ‘Once Upon A Time In Hollywood’