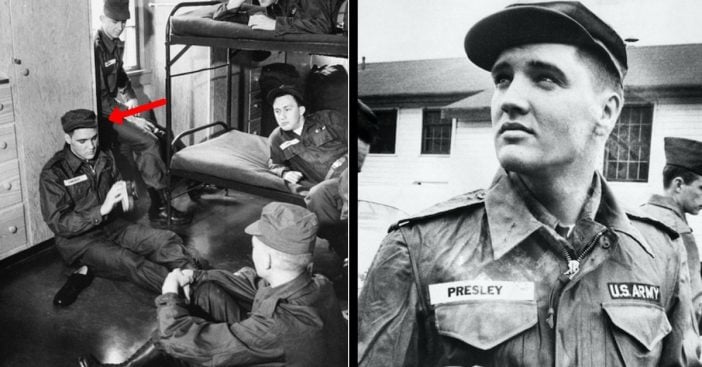 23-year-old Elvis Presley was drafted for the U.S. Army in March 1958. The Navy, Air Force, and even The Pentagon were hoping to be the choice for the King. Upon joining the Army, Presley would turn down any offers of special treatment. He simply wanted regular training and was offered $78 a month on top of another $1,000 from his record company.

By the end of Presley’s service, he had 10 Top 40 records under his belt. His final day of active duty was March 5th, 1960. Many people forget that Presley was drafted during the prime of his success as an entertainer. Here are some rare and incredible photos of the King of Rock and Roll while he was in the Army.

These Elvis Presley Army photos are a treasure to the U.S.

In this photo, Presley is awaiting an issue of more Army clothing. He was then sent to Fort Hood, Texas, for eight weeks of basic training.

The photo above showcases Presley among several other servicemen during an inspection at Ft. Chaffee.

Presley is getting his hair shorn off in the above photo, preparing for his line of duty in the Army in 1959.

The photo above shows Presley getting his height measured at 6 1/2 for the pre-induction physical examination.

In 1958 in Bremerhaven, Germany, Presley looks from a train window with two other GI’s and waves to fans.

Presley sits on the barracks floor as he polishes his shoes. For other inductees are looking on and relaxing on their bunks Ft. Chaffee reception center.

At this point in time, Presley had been promoted to acting sergeant as he studies himself in the mirror while settling into his military uniform.

Presley warming up his hands by the fire, a month prior to his discharge from the military. Now check out our deep dive into the King’s family then & now: