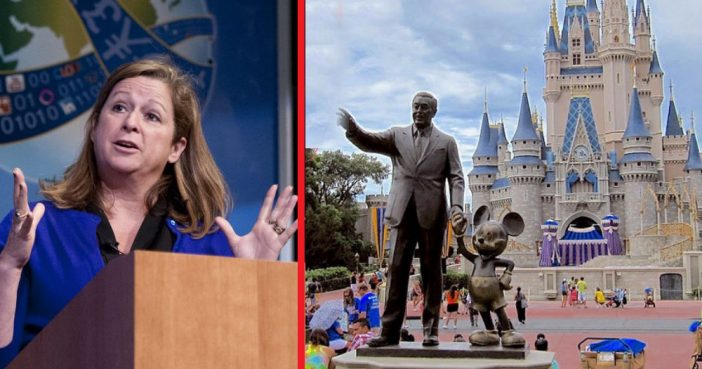 The Walt Disney Co. normally does not comment on stories in the news, but they are breaking their silence after learning about Abigail Disney’s story. Abigail Disney is the granddaughter of Roy. O Disney. Abigail recently visited the California Disney park and said she was “livid”, hearing about working who were making $15 per hour when the Disney CEO Bob Iger gets an “insane compensation.”

Abigail claimed that workers said things like, “I don’t know how I can maintain this face of joy and warmth when I have to go home and forage for food in other people’s garbage.”

According to Newser, Disney pushed back by saying, “The men and women who make Disney parks such a special experience for millions of people are dedicated, hardworking and proud, and we will continue to listen to, empower and reward them. That’s what this company has done throughout its history and will continue to do in the future.”

Disney also called Abigail’s reports “particularly egregious.” They continued, “This widely reported stunt is a gross and unfair exaggeration of the facts that is not only a misrepresentation but also an insult to the thousands of employees who are part of the Disney community. We strongly disagree with this characterization of our employees and their experience at Disney.”

They also said that on average Disney park employees make $19.50 per hour and they offer great benefits such as childcare, leave policies, and more.

Abigail Disney, the heiress of the beloved Disney, has opened up about her childhood and dealing with alcoholic parents. Her grandfather was Roy O. Disney, and he co-founded The Walt Disney Company with her great uncle, the famous Walt Disney. Abigail, who is now 59 years old, remembers her trauma in a new Yahoo News series called Through Her Eyes.

“There’s this assumption that I just was raised on fairy dust and rainbows,” Abigail says, remembering her parents Roy E. Disney and Patricia Ann Dailey. “My parents were conservative and very strict and both alcoholics. So there was some violence in my home.”

She did not feel safe in her own home

“Not all over the place, not all the time. But when you do get subjected to some violence as a child, you kind of never feel safe again,” Abigail explains. “So we didn’t feel safe in my home at all.”

Abigail also reveals that her grandfather (the co-founder of Disney alongside Walt Disney) did eventually get the help regarding his own alcoholism. This was prior to his death in 2009. Abigail also recalls the significance of the Disney princesses in her life from a young age and what meaning they held for her.

Abigail Disney did not fit the mold

“The princess philosophy in most of the early films was a philosophy I was raised on,” she remembers. “I was raised to be very, very, very polite and to pay attention to how I treated everyone, and to carry myself well, and to not be the loudmouth that I am.”

She continues, “I never fit that description,” she says. Abigail remembers being a tomboy as a kid. “I guess I feel a cynicism about the princess thing and the ultra femininity thing because I had my life handed to me on a silver platter… And I did not ask or earn it.”

Abigail reveals that she did love going to the actual park. However, she was only allowed to go there for special events. This means that should the family have a special event to go to, she would have to dress up in her ‘white gloves and patent leather Mary Janes.’ She didn’t really get to experience the joy of a kid being at Disney.

Abigail said that she felt like she was escaping from prison when she left for college. She is now a successful producer, filmmaker, and philanthropist. She has also given away millions of dollars that she inherits from her family when she turned 21. Wow!

Can you believe some of the questionable history behind Disney and its core founding family?

Take a look at these rare color photographs from Disneyland’s opening day back in 1955.