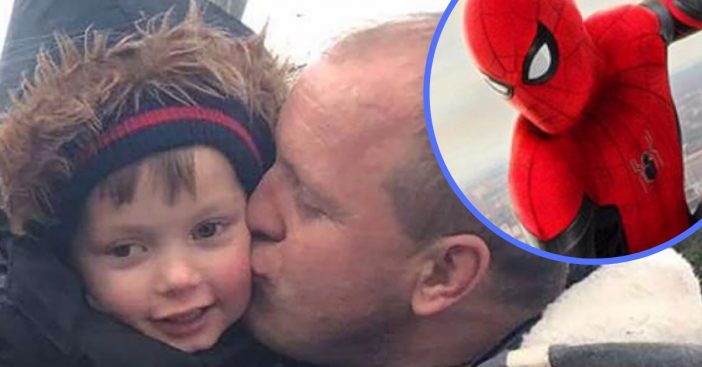 A father in England tried to honor his late four-year-old son, but Disney denied him of doing so. Ollie Jones passed away from a rare genetic disease. His last trip had been to Disneyland with his family so that he could meet his favorite superhero, Spider-Man.

His family even gave him a Spider-Man-themed goodbye, with a horse-drawn carriage decorated with red and blue balloons at his funeral. Red and blue are Spider-Man’s signature colors. His father, Lloyd, wanted to place an etching of Spider-Man on his son’s grave.

Learn what happened next in this Spider-Man story

He was told to go to his local council to ask permission. They told him he had to speak to Disney and submit an official request. His request was denied because the company does not want to associate its characters with death, but the family thinks it was because of another reason.

It appears that Lloyd’s brother, Jason reached out to the company after the request was denied. Jason said that “it meant everything to us,” so he hoped to get answers.

The official statement from Disney was this: “We follow a policy that began with Walt Disney himself that does not permit the use of characters on headstones, cemetery or other memorial markers or funeral urns.”

The statement continues, “Although we cannot grant the family’s request, we would be pleased to commemorate your nephew with a hand-inked, hand-painted, personalized [action frame from the movie] that recognizes his love for Spider-Man, which will read: ‘For your — (nephew’s name). Thank you for letting us share in the magic of your life. Your friends at the Walt Disney Company.”

Ollie’s family believes that the decision is more about money. According to the New York Post, Lloyd said, “That makes no sense to me — characters die in their films all the time. I think this is all about money.”

See a prototype of the etching they wanted to use

Sadly, Ollie’s sister Laillah also has the same disease that just killed Ollie. It is leukodystrophy and damages the brain, spinal cord, and peripheral nerves.

What do you think about this story? Do you agree or disagree with the fact that Disney won’t allow Ollie’s family to put a Spider-Man character on his gravestone?

Another reason people are not happy with Disney lately?

They changed this classic attraction at their theme parks and people were angry!

Previous article: Is There A Real Forrest Gump? We Finally Learn The Truth
Next Post: Do You Remember Olivia Newton-John’s No. 1 Hit “Have You Never Been Mellow”?