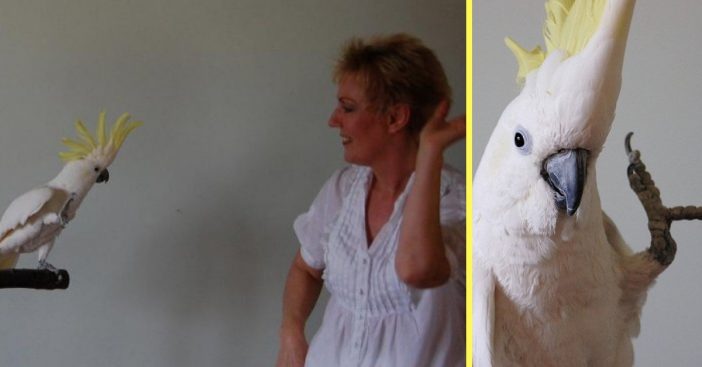 Snowball the parrot loves to dance. His favorite songs? The ’80s classic hits! Scientists are baffled by the bird, who was showing moves that we previously only thought humans could do. Snowball is a 12-year-old sulphur-crested bird. He has been seen performing 14 different moves!

The parrot has never been trained or encouraged to dance, so it seems that he picked up these moves all on his own. He also doesn’t seem to dance for food or any other type of rewards. He genuinely seems to love to dance and entertain his human friends.

Learn some of the dances moves that Snowball performed

Snowball has been seen doing the “down-shake”, “body roll” and “downward/head-foot sync”, “Vogue”, and even a headbang! He listened to songs such as “Girls Just Wanna Have Fun” and “Another One Bites the Dust.” Snowball has about 14 different dance moves overall.

Scientists are now wondering if we have more in common with parrots than we previously thought. No other animal has been recorded as doing these dance moves. As of now, chimpanzees are seen as the closest genetic animal to humans. However, chimpanzees do not dance.

According to The Telegraph, researchers wrote, “Snowball does not dance for food or in order to mate; instead, his dancing appears to be a social behavior used to interact with human caregivers.”

When Snowball was only one year old, he was studied for his dancing to the song “Everybody” by The Backstreet Boys. After that, Snowball’s owner, Irena Schulz, saw Snowball exhibiting new dance moves. She started recording the videos and sending them to researchers.

At times you can hear Irena telling Snowball he is a “good boy” in her videos, but she doesn’t generally dance with him. This suggests he loves to dance all on his own, and he often changes his dance moves during the songs. Researchers believe that his brain is triggered to dance by eighties hits! How cool is that? What do you think about his sweet moves?

Check out the video below to see all of Snowball’s dance moves. We dare you not to smile when you watch it!

One time, a rescuer found a parrot trapped on a roof…

When he went to save the parrot, he was greeted with a slew of swear words! Read the story here.

Previous article: Pink Slams Harsh Comments On A Summer Fun Photo Of Her Daughter
Next Post: Woman Has Grandma Put On Her Old Wedding Dress, She Can’t Help But Tear Up