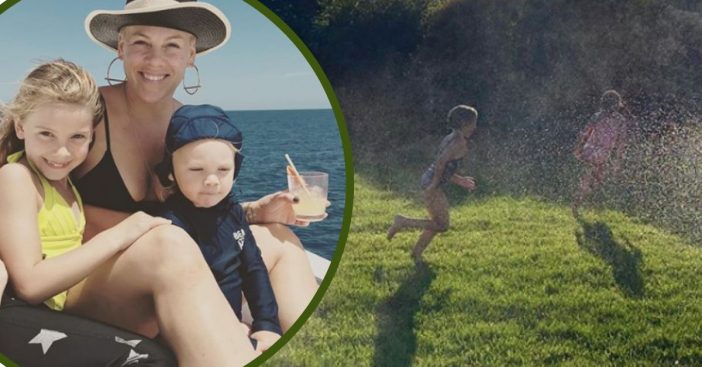 She posts a photo of her daughter, Willow, having some summer fun running through a sprinkler. Everything looks totally normal and good until you have a look at the accompanying caption.

Her photo caption mocks ‘parenting police’ in the comments section

“Here’s a picture of my child running through water,” the caption begins. “It wasn’t even filtered. What a waste of water. And no helmet? I hope she had sunscreen. If she slips and falls she may be traumatized for life. And her mother wasn’t even there. I was….. gasp…. working!!!! In another country!”

Pink was just mocking all of the other parenting police trolls in the comments nit-picking every single thing she does as a parent to her own kids. She also has the comments OFF for this particular photo. She adds some hashtags to the end of the post like “F— the parenting police” and “If you feel like unfollowing, please God, do it quickly.”

As previously mentioned, Pink earned some backlash from parenting police commenters when she posted a family photo that showed her 2-year-old son, Jameson, without a diaper on. She and her husband, Carey Hart, also receive criticism from allowing 8-year-old Willow to ride a dirt bike. Everyone just really feels the need to chime in with their two cents!

Back in April, she vows to stop posting photos of her children after one comment about Jameson not having a diaper on said that he should be taken away from her.

Pink spoke to Ellen Degeneres about the situation and how devastated she was about receiving these awful comments. “I cried. I cried so hard after that because I like to share my family. It’s my proudest moment in my whole life. I’m prouder of my kids than anything I’ve ever done. And I just won’t share them anymore. I won’t do it. I’m not posting pictures of them anymore.”

“There’s a way to do things and that mean stuff, that ain’t it.” She adds that it’s also probably a good time to pull the kids away from social media “because [Willow] is seven now, it’s probably time to pull her back from the world and let her just live her best life.”

Should Pink pull her kids from social media completely or should she keep doing what she, in her heart, wants to do? Despite any harsh comments from parenting police?

Take a look at what comments were made towards her son’s photo a while back. And how Pink addresses it.