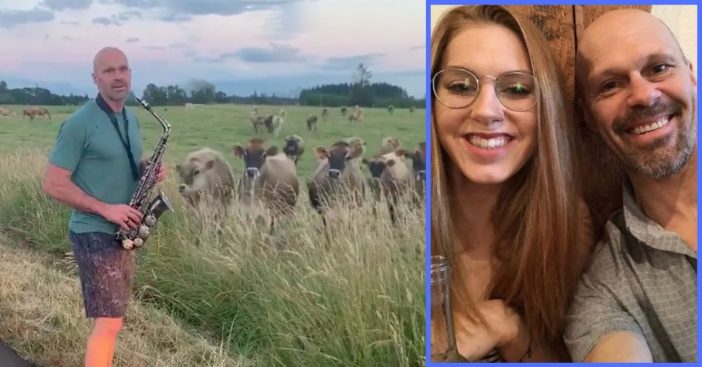 Cows are like big dogs to me. That’s why I personally cannot get over this adorable video of a dad playing the saxophone for a crowd of cows! And they absolutely love it. A man named Rick Hermann in Lafayette, OR is the creator of this very wholesome moment. He began learning how to play the sax several months ago after years of wanting to learn.

“Just one day I was like, ‘Why not now? I’m going to get one,'” he says to BuzzFeed News. His wife was the one who had the idea to serenade the local cows in the area!

Rick is surprised the video has garnered so much praise

Rick’s daughter, Erin, took the video of her father serenading the cows with some saxophone music. “My parents are such goofs, they drove out to the backroads so my dad could play the cows the songs he’s been learning on the saxophone,” she writes as a caption with the video. The cows absolutely loved it and so did everyone on the Internet!

“First of all, I love cows. I spent my summers on a dairy farm,” Rick says. “I had a feeling they’d come up if I started to play.” He plays a set of songs such as “Isn’t She Lovely” and “Careless Whisperer.”

Check out part 1 of the video below

my parents are such goofs they drove out to the backroads so my dad could play the cows the songs he’s been learning on the saxophone pt.1 pic.twitter.com/IHzgxtvo0N

Rick ends his little set with the song “Tequila.” If you listen closely, you can hear a neighbor singing along on the chorus! “I just want to make people smile. I just didn’t think it would be so soon, and to so many people,” Rick says after realizing how popular the video has gotten.

Part 1 of the video below amassed almost 300,000 retweets and almost 900,000 likes. Many people have taken to Twitter to praise the video. One person says, “Cows are beautiful intelligent animals that deserve love and attention just like your pet dog or cat.”

Watch part 2 of the video below

pt.2 listen for the neighbor at the end pic.twitter.com/qdMCnZRzqh

“I love this! Everything about it. Your dad learning to play the Sax. Playing it to the cows. The neighbor yelling “Tequila!” This made my day!” says another Twitter user.

Another says, “This is great! Just shows that God loves music so much he instills that love in all his creatures! No one should ever have to lead a herd to/from a pasture again. Just hire a musician to play for them and #TheyWillCome!” Sounds like everyone is a fan of this video!

There’s nothing better than a heartwarming animal story!

Speaking of animals, take a look at what one animal shelter is planning to do this coming July 4th. It will truly warm your heart!

Previous article: When No One Shows Up To A 7-Year-Old’s Birthday, The Community Steps In
Next Post: Elvis Presley’s Granddaughter Shares Rare Photo Of Her Father