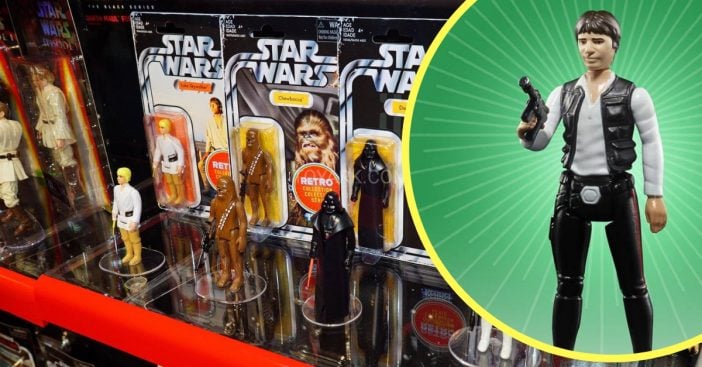 The classic 1970s Star Wars figurines you know and love are back! While collectors might be annoyed at this re-release, fans of the movies will likely be excited. If you tried to get an original Star Wars action figure on eBay, it would cost a small fortune. However, now you can get one for around $9.99.

For instance, Hasbro has re-released six classic toys and they are being exclusively sold at Target. They are likely to expand to other stores in the fall. Hasbro is calling these figurines their “Retro Collection.”

The six classic action figures are Darth Vader, Luke Skywalker, Princess Leia, Chewbacca, Han Solo, and a generic Stormtrooper. They were originally released after the first movie in 1977. The company Kenner first produced these action figures, but Hasbro acquired them and the Star Wars licensing in 1991.

Take a look at photos of all of the Star Wars characters and watch a video to see them even closer. Will you purchase any of these?

Check out more photos of the re-issued action figures

Not sure why Princess Leia is wearing a cape, but she still looks fabulous!

Chewbacca is one of the best characters in my opinion! Who is your favorite? Sadly, the original voice actor for Chewbacca recently passed away.

Capes seem to be a theme with the original figurines. For instance, Darth Vader is seen wearing a cape as well. I wonder why?

Lastly, you can’t go wrong with a stormtrooper. They are a classic character in all of the Star Wars films. Who is your favorite character in the series?

Love Star Wars? You have to see this first look of Disney’s Star Wars Land!