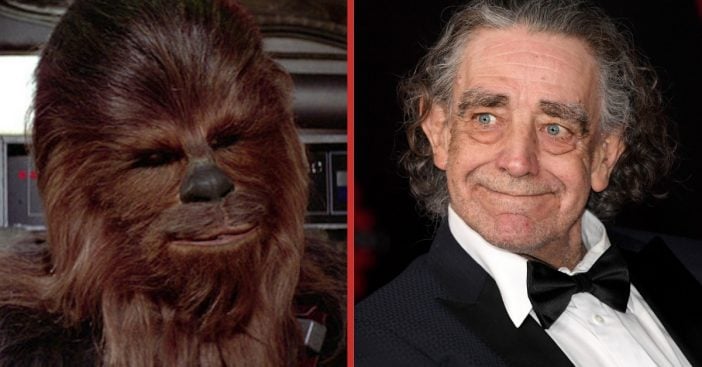 Peter Mayhew, who is best known for his role as the Wookiee Chewbacca in the Star Wars films, has died at the age of 74. The reportedly died on Tuesday, April 30th, in his home surrounded by family. His official Twitter account had noted that the actor had undergone spinal surgery in July in an effort to improve his mobility.

Other than that information, there is no real confirmation on the cause of death at this time.

Peter Mayhew was born May 19th, 1944. He is best remembered for playing the role of Chewbacca, specifically in the films Star Wars (1977), The Empire Strikes Back (1980), Return of the Jedi(1983), Revenge of the Sith (2005) and The Force Awakens (2015). When he originally tried out for the role of Chewbacca, he was already doing some minor acting but mainly working as a hospital orderly.

Writer-director George Lucas was desperate to find someone who was larger/taller than Darth Vader, so Mayhew was hired for his tall physique. Mayhew stood extremely tall at 7-foot-3.

Even after the first Star Wars film, Mayhew went back to work as an orderly and didn’t actually leave his job for good until Return of the Jedi. He was able to make a huge living off the successes of the Star Wars saga and specifically his character, which had become a huge fan-favorite.

While Mayhew did not provide the voice for the 200-year-old Chewbacca (the voice actually belonged to that of Ben Burtt) news outlets say that many fans credit Mayhew’s expressiveness of the character in making Chewbacca such a lovable character. The success that Mayhew found in this role paved the way for many other films, TV shows, and roles, including Donny & Marie and The Muppet Show and  Glee.

Disney CEO Bob Iger spoke fondly of Mayhew and his work with the Star Wars saga under the Walt Disney company. “Peter was larger than life in so many ways … a gentle giant playing a gentle giant. Rest in peace,” he said.

Mark Hamill, who is known for playing Luke Skywalker, also paid tribute to the actor, saying, “He was the gentlest of giants-A big man with an even bigger heart who never failed to make me smile & a loyal friend who I loved dearly-I’m grateful for the memories we shared & I’m a better man for just having known him.”

He was the gentlest of giants-A big man with an even bigger heart who never failed to make me smile & a loyal friend who I loved dearly-I'm grateful for the memories we shared & I'm a better man for just having known him. Thanks Pete #RIPPeterMayhew #Heartbroken @TheWookieeRoars pic.twitter.com/8xbq9HEWF2

Please SHARE this article to honor Peter Mayhew’s legacy in the acting industry and specifically in the Star Wars saga. May he rest in peace.

Check out the video below on some facts you may not know about the fictional character, Chewbacca: