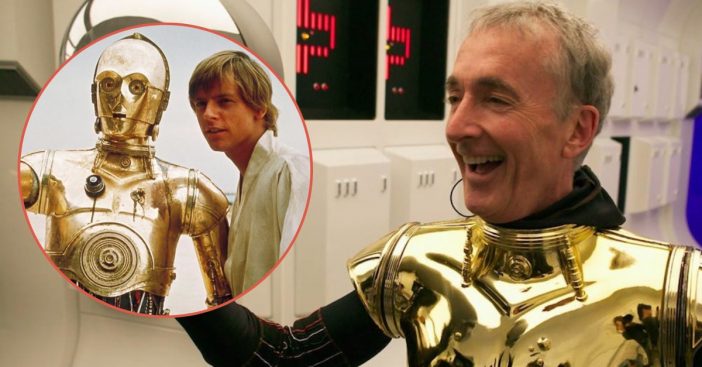 Star Wars‘ Anthony Daniels has posted a touching yet heartbreaking message in light of his last day as C-3PO in Episode Episode IX, meaning that C-3PO is officially coming to an end in the Star Wars franchise. Daniels was part of the Star Wars team for several years and had been playing the same role since the release of A New Hope back in 1977.

The now-72-year-old actor was clearly feeling very sentimental after the final episode in which his communication droid character would finally come to an end.

Today was 3PO's last on Episode IX. He's sad – so am I. But we're so proud to have worked with such a lovely, talented cast & crew lead by J.J. & Kathy. I'll miss everyone but I'm glad to know that we've been making something exceptional together, to share with the waiting world.

“Today was 3PO’s last on Episode IX. He’s sad – so am I. But we’re so proud to have worked with such a lovely, talented cast & crew lead by J.J. & Kathy. I’ll miss everyone but I’m glad to know that we’ve been making something exceptional together, to share with the waiting world,” his post read.

Star Wars fans everywhere are saddened by the reality of the news and will miss C-3PO just as much as he misses it.

The character of C-3PO has missed out on a few Star Wars films, but the actor himself has physically been there for every single movie in the franchise. This includes Solo: A Star Wars Story, where he actually played the role of Tac.

Allegedly, fans of the saga had been asking John Boyega if he can explain how Episode IX ends. He couldn’t help but reply with a joking response that didn’t really give fans much hope. When asked, “Can you tell us how it all ends?” Boyega replied, “Yep. Fades to black and the credits go up.” Looks like we really have no idea what to expect!

Be sure to SHARE this article if you’re feeling just as bittersweet about C-3PO’s final performance!

Check out the video below of predictions of what Star Wars will look like after Episode IX:

Previous article: Thyme Is The Perfect Natural Remedy For Fighting Strep Throat, Flu, And More
Next Post: How To Clean Mold Hidden In Your Travel Mug Before It Makes You Sick