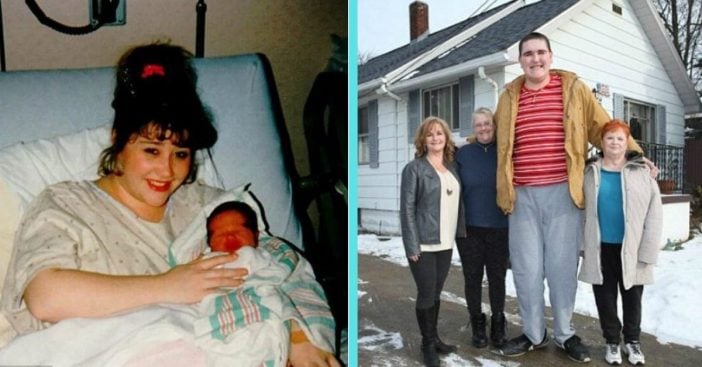 When I was younger, my grandparents used to have a book called Very Special People, which detailed photos and the lives of people with medical mystery conditions. The description of the book says that “Siamese twins, midgets, giants, bearded ladies, and hermaphrodites are among the people profiled with compassion and insight.”

One man named Broc fits right into this amazing book, as he stood at 7’8″ in 2018 and we can’t imagine how tall he must be now! Here is his story.

Darci Brown Elliot immediately knew that something was off about her newborn son. She was definitely impressed about the size of him, at 22 inches long, but she feared that something was medically wrong with him. Despite this, as Broc continued to grow up, he was as normal as any other kid.

With this being said, he would tower over everyone else. Even those other kids that were said to be “big” for their age could not compare to Broc’s size.

While it was normal for any kid to experience growth spurts, the reason why it was so bizarre for Broc was that by Kindergarten, he was already over five feet tall! His mother, needless to say, was extremely worried. She was experiencing back problems from attempting to carry him and she was trying to keep up with his endless appetite.

His size prevented her from properly caring for him in his true age and he now couldn’t even do normal kid things like ride a bike.

Of course, this condition never made Darci love him any less. But, she desperately needed to find out what this condition was. After several consultations with specialists and many tests later, they came to the conclusion that Broc had a rare hereditary condition called Sotos Syndrome, also known in the medical community as “cerebral gigantism.”

The condition allegedly affects 1 in every 15,000 people and it causes extreme growth spurts. While they now had answers, the side effects of the condition did not bring peace of mind to anyone.

If Broc truly never stopped growing (and at the rate he was growing at), he would need to prepare for a short life with health problems. At one particular doctor’s visit, Darci was brought the news that no mother ever wants to hear. She was told that Broc would likely not survive past his teen years, due to the stress put on his heart as his body aged.

He was only 14 years old at the time and already experiencing chronic pain most of the day. He would also need to sleep 16 hours a day and had a specialized chair so he could sit comfortably in it.

Despite everything, his family and all his friends at school were supportive of Broc through his health battles. Broc soon held the Guinness World Record for tallest teen up until 2015, and in 2016, he was approached by TLC to be in a documentary called Tallest Teens, which featured several teenagers in America who dealt with these abnormal growth spurts.

He and his mother also appeared on The Maury Show for an anti-bullying campaign. This would soon jumpstart doctors to notice him, and he was able to meet with another doctor who specialized in Broc’s condition. The doctor was able to provide the family with the fantastic news that Broc had already beaten the health odds and was going to have a normal lifespan!

In 2018, Broc stood very tall at 7’8″ and weighed in at 500 lbs and he is still growing! Even though Broc’s day-to-day routine is still a struggle, he and his family could not be happier than he will be here to stay, despite everything.

Think you’ve seen it all? Try again! Check out this story of Freddy the 7-foot-tall Great Dane, who has officially been named the tallest dog in the world.