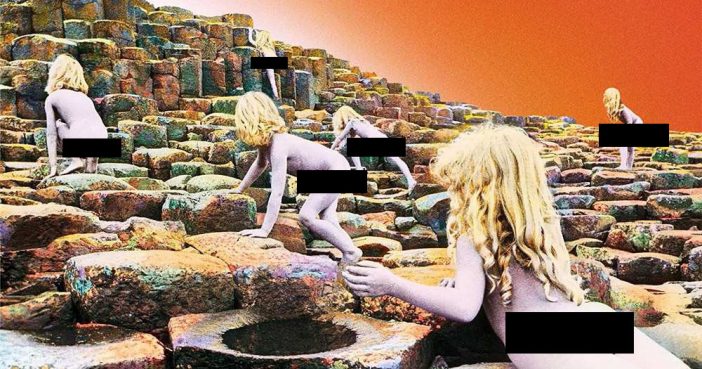 As of June 21st, 2019, it has been reported that Facebook has allegedly lifted the ban on Led Zeppelin’s Houses of the Holy artwork. A spokesperson for Facebook released a statement on lifting the ban: “As our community standards explain, we don’t allow nude images of children on Facebook. But we know this a culturally significant image. Therefore, we’re restoring the posts we removed.”

Facebook has allegedly banned Led Zeppelin’s album artwork for Houses of the Holy and fans are not happy about it one bit. Fans took notice of this when Facebook user Michelle Kaotic uploaded the album artwork back in 2011 to an event page marking the anniversary of the album’s release. However, eight years later, the photo has been removed.

Facebook issues a notice to Kaotic, saying that the post has gone against the company’s community standards on nudity or sexual activity. She originally thinks it’s a one-off thing. She ends up running into trouble once more.

The artwork for ‘Houses of the Holy’ Other people began to report similar stories. A friend who runs a Jimmy Page fan page is not let into her account for three days after posting the image. That’s when Kaotic took it into her own hands to start a petition. However, it wasn’t smooth sailing whatsoever.

“Approximately 30 minutes after posting the petition on my page, I received a notice that the post went against community standards,” she says. “I then created another post, mentioning how the petition was removed. Before too long, everyone was commenting, indicating that they had shared the petition and been given warnings.

Kaotic continues to explain that anyone who shares the petition link has the link removed. This is because the thumbnail of the album cover was showing. Some members who share the post even receive 24-hour bans. How insane is that?

Additionally, old fan pages for Led Zeppelin with the creation year of 2012 also experience removal. So, why are images of an album cover being removed? An album that has sold over 10 million copies in the U.S. alone no less.

Facebook’s algorithms are to blame

Since 2013, Facebook reveals that users are uploading 350 million photos a day to the platform each day. This means a problem for proper moderation. So, they implement new algorithms. This means any photo baring a certain percentage of skin may automatically be against community guidelines.

Moderators see any photos against the community guidelines. However, these mods can potentially be in a country far, far away from the U.S. meaning they likely have never seen this album cover before. They just click ‘Yes’ or ‘No’ to ban the photo or keep it live. Once the removal happens, it’s likely to again.

This means pretty much any photo containing any sort of nudity can trigger the community guidelines notice.

Take a look at the official petition to stop Facebook from censoring album artwork.

Speaking of Led Zeppelin, take a look at the time one of Billy Joel’s concerts turned into a Led Zeppelin cover show! It sounds amazing.