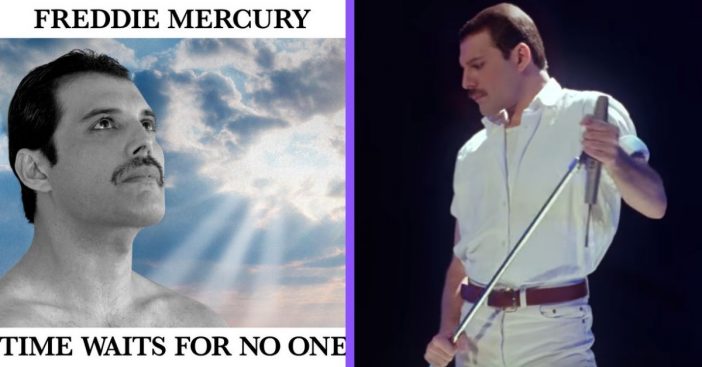 What exciting news! A previously unseen performance of the song “Time Waits For No One” by Freddie Mercury has been released. According to reports, it was “buried deep in the vaults.” It was originally recorded and released in 1986 for the concept album of the hit musical of the same name. It was originally under the name “Time.”

Songwriter and producer Dave Clark, a long-time friend of Freddie’s has been working on it for two years in order to release it. Now, it is finally available for everyone to relive the memories and amazing vocals of the late singer.

Check out the previously unseen performance below

The song itself is extremely raw and passionate, showcasing Freddie’s unbelievable vocal range. The description of the video describes it as “a completely stripped-down performance, accompanied by just a piano.” The video is a live performance of the song, dubbed over with the stripped-down version.

The reason why this is such an incredible version of the song is that the original was so much different. The original definitely sounded like something straight out of a musical; heavily produced, heavy drums, and thick layers of backing vocals. It does not have the same emotion that this previously unseen performance has.

Clark recalls talking with Freddie about their expectations from the song and how it should be performed. “Freddie asked me, ‘How do you want me to perform this?’” Clark recalls. When he tells Freddie how he’d like it performed, he says, “‘Well, dear. I have all the dresses. I can do it perfectly,’” Clark remembers. He co-wrote the song alongside John Christie.

The two first met in 1976 when Queen played a set at London’s Hyde Park.

“I stood on the wings of the stage, and I was taken aback because this guy came out in a black leotard, and I thought, ‘Wow, what’s this? Liza Minelli?’” Clark remembers about when he first saw/met Freddie. “And then he opened his mouth and sang. It was unbelievable. What a performer. And the show went down amazingly.”

“The nice thing about the film is it’s Freddie on his own without anybody else, and it shows the emotion of the song,” Clark says. “We all know he’s a great singer, but I don’t think he’s been seen on his own with just a piano like this. It makes you realize how good somebody is.”

Check out the full music video for the song below.

We can’t believe it’s been so long since Freddie has been gone!

Take a look at when Queen’s Brian May talks about when they lost the incredible Freddie Mercury.

Previous article: Facebook Lifts Ban On Led Zeppelin’s ‘Houses Of The Holy’ Album Artwork
Next Post: Eighteen Things You Should Throw Away In Your Home Right Now