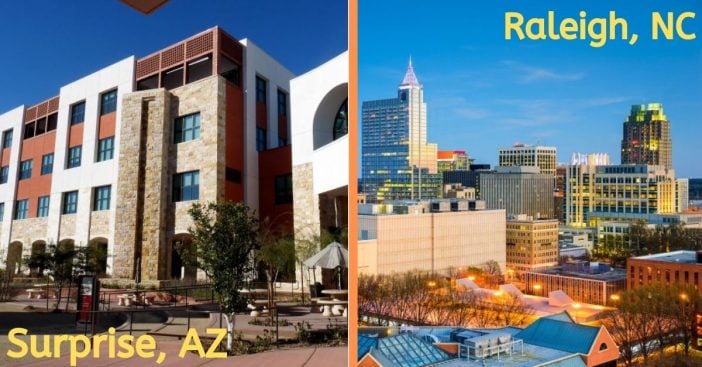 It is no secret that as you get older, you form a rest-of-your-life plan. It may or may not consist of moving to a whole new state and starting fresh for your retirement. There are actually several hot-spot cities that are known for being ‘home’ to retirees who are just relaxing and living their best lives. And it’s not just in Florida!

There are several cities on this list, some of which are located in the same state! The data is all recorded from SmartAsset, who keeps track of how many retirees move into what city. You might be surprised at some of these cities! Take a look.

This was surprisingly the #1 spot for seniors to move to for retirement. SmartAsset saw net immigration of 2,341 seniors, with 3,191 coming to town and 850 calling it quits. SmatAsset calls Nevada “one of the friendliest states for retirees.” This is because the state has no income tax, which is desirable to many, including retirees!

San Antonio, Texas is another top 10 retiree state due to having no state income tax or tax of any kind on retirement income. Not to mention, it’s also just a beautiful state with great weather and had a net increase of 2,306 seniors just last year.

This city is not only a desirable location for retirees to move to, but it’s also a gorgeous vacation destination. Scottsdale is known for its resorts, golf courses, galleries, and culinary scene, making it the go-to option for many. The city saw a net influx of 1,834 retirees last year, even though it’s slightly more expensive than other Arizona cities.

The median home cost for places in Mesa, Arizona is less than $1,000, significantly cheaper than in Scottsdale. Just last year, just under 2,300 retirees moved to the beautiful city.

Are you surprised to see Las Vegas on this list? 4,387 retirees made Las Vegas their new home last year. This is because there are low property taxes and no levy on retirement income. From a tax perspective, it’s been deemed the most retirement-friendly area for seniors.

Read onto the NEXT page to see the ‘honorable mention’ city on this list!

Page Page 1 of 2
Previous article: Matriarch Of ’19 Kids And Counting’ Grandma Mary Duggar Dies At Age 78
Next Post: Family Is Outraged After Son With Autism Receives “Most Annoying” Award At School