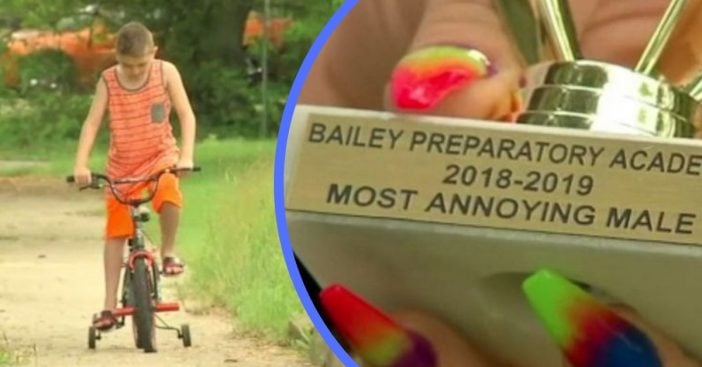 The parents of an 11-year-old boy named Akalis Castejon are completely outraged as their son with autism was given the “most annoying” award at school. His father, in particular, was furious that a special education teacher would pick his son for such an award. Rick Castejon, the father, spoke to news outlets about the situation. We were blindsided. We just weren’t expecting it,” he says.

“As a principal or teacher, you should never let this happen to any student,” he continues. The end-of-the-year awards ceremony took place at the Bailey Preparatory Academy in Gary, Indiana.

A photo of the “most annoying” award

Castejon said that the special education teacher tried to play it off as a joke. However, as the situation settled, the parents really began to put two and two together. The teacher would often call the Castejon’s at home with concerns about their son’s behavior at times. They suspect that their son’s behavior could have contributed to this ‘award.’

However, Castejon says that his son’s special education teachers should know how to deal with the behaviors of a special needs child. The boy often rocks back and forth and becomes emotional. He is also non-verbal.

After what happened, Castejon met with the school district’s emergency manager, Peter Morikis. As a result, Morikis releases a statement to The Times of Northwest Indiana:

“The Gary Community School Corporation does not condone this type of behavior and will continue to put the safety and well-being of our students first. We extend our deepest apologies to the impacted student, the family and anyone else who take offense to this unfortunate occurrence.”

Morikis did not disclose if the teacher was terminated from their position. Castejon says that the possibility of a two-week suspension or even firing the teacher was in discussion.

Both parents say that they are happy with Morikis’s response. The teacher was not present at the fifth-grade graduation in late May. Furthermore, Castejon said that the family was planning on moving and their son would not be attending the Gary school district next year.

Can you believe that any school would give this award to any child?

Take a look at this older story, where a teen with non-verbal autism finally finds his voice during his high school graduation speech. It is truly amazing!