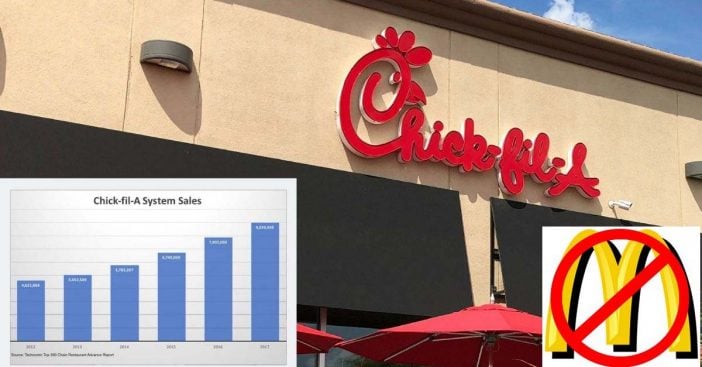 For several years, McDonald’s was known as the go-to fast food restaurant, but it looks like Chick-fil-A is taking over that spot. Gregory Francfort of Bank of America Merrill Lynch says that Chick-fil-a is a great threat to other chains in the fast food industry, including McDonald’s. Chick-fil-A was founded in 1946 and has only had continuous growth since.

Known as the biggest chicken-focused fast food chain, they sold about $10.7 billion worth of food last year. Additionally, from 2010 to 2018 alone, they have increased their total revenue by a 15% annual rate.

Why other fast food chains should take notes

Chick-fil-A’s success does not stop there. Last year, the fast-food chain had an average of $4.7 million in sales per store. This greatly surpasses McDonald’s $2.8 million and $1.3-1.8 for other competitors. Reports show that Chick-fil-A has been taking the business that Subway has been losing over the years. Subway’s share has decreased from 12% to 8% since 2010.

The same reports expect Chick-fil-A to increase to a 15% industry share by the year 2025 from the current 9%.

With Chick-fil-A’s tremendous success in mind, McDonald’s has only claimed about one-third of the industry’s total sales. Revenue continues to grow for the original fast food giant, but it’s mainly due to higher menu prices. It has also been closing locations over the last few years to restructure its operations.

Furthermore, foot traffic has been on a continuous decline for McDonald’s, adding to its overall decline as a fast-food chain with Chick-fil-A in the mix.

Despite all of this, Francfort believes that McDonald’s will get out of this slump and continue to grow. If that’s the case, chains such as Wendy’s, Burger King, Jack in the Box, and many more might feel the wrath of Chick-fil-A’s growth even more. States in which Chick-fil-A has a strong presence include Delaware, Texas, and Georgia. This means those restaurants, in particular, will likely experience that pressure in regional sales.

It doesn’t help that Chick-fil-A has often been praised for the way it trains its employees to be super friendly and polite. People would rather go to a restaurant for the kind customer service. This is something that is often not experienced at other fast-food chains, according to reports.

It’s no secret that Chick-fil-A is really killing it this year!

The restaurant is not only known for its chicken, but also for being closed on Sundays. Read into why this is such a successful marketing strategy for them!

Previous article: A Western Michigan Park Is Paying Tribute To ‘The Wizard Of Oz’
Next Post: Marilyn Monroe’s Alleged Pregnancy Photos From Affair Now For Sale