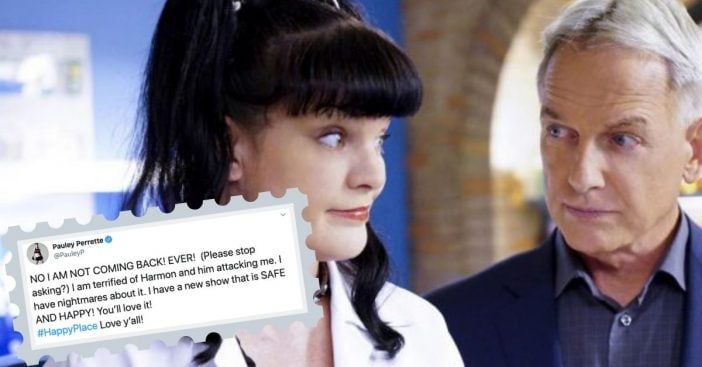 Pauley Perrette was on the crime drama show NCIS from seasons 1 through 15 and promises she will not be returning to the show. Upon her departure from the show, there has been a lot of talk from her consisting of allegations towards the show’s star, Mark Harmon. The allegations consist of physical abuse and “attacks”, as Perrette says.

She recently took to Twitter to say she will not be coming back to the show and also for people to stop asking. “I am terrified of Harmon and him attacking me. I have nightmares about it,” she says in her tweet.

NO I AM NOT COMING BACK! EVER! (Please stop asking?) I am terrified of Harmon and him attacking me. I have nightmares about it. I have a new show that is SAFE AND HAPPY! You’ll love it!#HappyPlace Love y’all!

A second tweet followed this one (that has since been deleted) along with a photo. Perrette said this was a crew member’s puffy and bruised eye, caused by Harmon. “I fought like hell to keep it from happening again! To protect my crew! And then I was physically assaulted for saying NO!? and I lost my job.”

There is no true evidence or proof that shows Harmon actually physically attacked anyone. No one else has come out with similar allegations either.

However, Deadline reached out to CBS for a statement on Perrette’s allegations against Harmon. They actually sent along the same 2018 script used for addressing Perrette’s departure from the show.

“Pauley Perrette had a terrific run on NCIS and we are all going to miss her. Over a year ago, Pauley came to us with a workplace concern. We took the matter seriously and worked with her to find a resolution. We are committed to a safe work environment on all our shows,” the statement says.

As for the fans, many are at each other’s throats about what could possibly be the truth behind Perrette’s tweet. Some are thinking it must be a ploy to promote her new show. Others believe Perrette’s allegations towards Harmon.

What the fans are saying

This vague and cryptic stuff has got to stop. From all accounts, Harmon never attacked you. His dog attacked a crew member…again, not you…and then he refused to give in to your demands. I don't know if you're under an NDA or what but these cryptic tweets have got to stop.

“This vague and cryptic stuff has got to stop. From all accounts, Harmon never attacked you. His dog attacked a crew member… again, not you… and then he refused to give in to your demands,” one Twitter user said.

“You need to come out and make it clear that it was HIS DOG AND NOT him,” another Twitter user chimes in. “STOP with making Mark out to be a bad guy! You’re starting a rumor that can damage him.”

Neither of you know what happened. Maybe stop following her if you don’t want to read the truth. 🤷🏻‍♀️

However, one person was quick to come to Perrette’s defense.

A majority of people actually disagreed with Perrette’s allegations and even corrected her recollection of the situation. It’s unclear what action Harmon will take to clear the air about this.

Let’s move onto something a little more lighthearted, shall we?

NCIS officially confirmed that Ziva David’s storyline is not over quite yet! Will we be seeing a return of Ziva on NCIS soon?

Previous article: You Might Be Able To Visit The International Space Station Soon, But NASA Says It Won’t Be Cheap
Next Post: Kelly Ripa’s Daughter, Lola, Went To Prom And The Internet Reacts