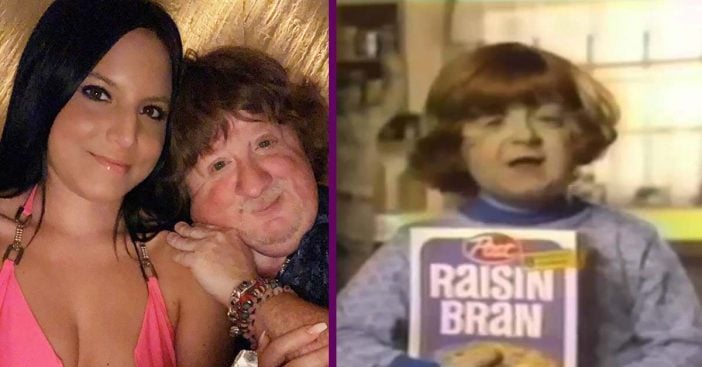 Do you remember the name, Mason Reese? He was huge in the 1970s for being the most popular commercial kid of that time period. He is a former child actor and appeared in several commercials that you might remember, from Underwood Deviled Ham to Post Raisin Bran, and Dunkin’ Donuts.

Now, the 54-year-old, who is only 4ft 10in tall, is dating a 26-year-old adult webcam model named Sarah Russi. Many claim that he is her sugar daddy but the two continue to say that money has nothing to do with their relationship. They also say that because of the obvious height difference, they often get stares when they go out in public. They say they’re used to stares now.

The two explain that their relationship is mainly based around common interests, mutual respect, and a similar sense of humor. “Truth of the matter is I don’t see myself as being in her league, so when I look at a beautiful young 26-years-old adult model I don’t think, ‘oh she is gonna be in love with me’,” Mason says.

“When she first expressed interest in actually being in a relationship with me I think I was just shocked as anybody,” he explains, “A lot of people have come out and been like, ‘really you are with that dude, like why? Is it for the money? Is it because he is your sugar daddy?’”

Sarah has allegedly worked as a sugar baby before, but she says that her relationship with Mason has nothing to do with money. “The idea of being a sugar baby is it can be like fun sometimes, like getting paid $300 for dinners, but ever since I started talking to Mason I just decided that I don’t want that anymore. I feel like I’m happy to be in a relationship with him,” she says.

Mason has also confirmed that she’s never asked him for a single penny. “I am really happy with Mason. I don’t need to be with him for his money,” says Sarah.

The two allegedly met at a horror film convention and they just hit it off right away. “When you meet somebody and you end up talking for three hours effortlessly – no pauses, no breaks, no uncomfortable moments of real silence – that’s kind of unusual and I think she felt that way as well,” Mason explains.

He says that not only are they lovers, but they are also great friends. They enjoy each other’s company more than anything. Except his commercial from the 70s of course! Good for them!

Do you remember Mason Reese in the ’70s kids commercials?

Meet Mason and Sarah, together in action! I honestly cannot believe how well they get along and connect with each other, despite the age difference.

Even if this couple is unconventional, we hope the best for them! Who are the other Child Stars from the 1970’s — check them out!

Take a look at these ten other Hollywood couples that have lasted for ages! We hope that they stay together forever.