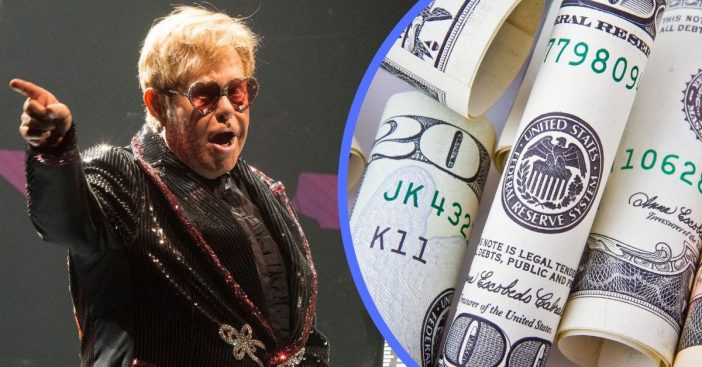 Elton John’s name is on everyone’s minds lately as the biopic Rocketman is released May 31st, 2019. The film, similar to the biopic of Freddie Mercury with Queen, explores John’s musical career. The US has been patiently awaiting the film’s release, as it has already been released in the UK.

The film stars Taron Egerton as Elton John, as well as Jamie Bell, Richard Madden, and Bryce Dallas Howard. Bryce Dallas Howard, Ron Howard’s daughter, plays John’s mother in the film. The film also gets into detail about John’s struggles with depression, substance abuse, and acceptance of his sexual orientation.

What does Rocketman have to do with Elton John’s net worth?

A lot. Just back in 2018, it was rumored that John’s net worth was estimated to be about £320 million pounds which equates to $403 million dollars. With this being said, the newest Rocketman film will definitely have an influence on John’s net worth of a likely increase.

In addition to earning a biopic film about his life, he is also one of the best-selling music artists in the world. He has sold over 300 million records during his five-decade career. His accolades include five Grammy Awards, five Brit Awards, a Golden Globe Award, an Academy Award, and a Tony Award.

Furthermore, The Hollywood Reporter predicted that Rocketman is on track to debut with a $25 million box office during the opening weekend. John also serves as an executive producer on the film and likely will receive a good chunk of money as a result of the undeniable success of the film.

He’s also in the midst of a three-year world tour, his final one, which will come to a close in December 2020. That tour alone is expected to gross over $400 million. While he will no longer be performing after this tour, he will likely still be earning from royalties and partnerships. This will cause his net worth to simply increase from there!

It’s important to remember that while John is insanely talented and that it’s no wonder how much he’s really worth, that he has always used his platform to promote positive change. In 1992 he founded the Elton John AIDS Foundation as a charity to fund programs for HIV/AIDS prevention. It’s also used to fight against discrimination and stigma of people with HIV/AIDS.

We certainly love Elton John here at DYR and all the positive work he’s done!

Check out tons more information about the newest Elton John biopic Rocketman here! It’s out in theaters, so be sure to get your tickets.

Previous article: CBS Facing A Multi-Million Dollar Lawsuit Over ‘Andy Griffith Show’ Theme Song
Next Post: Unusual Facts About Some Of The Most Famous People Of All Time