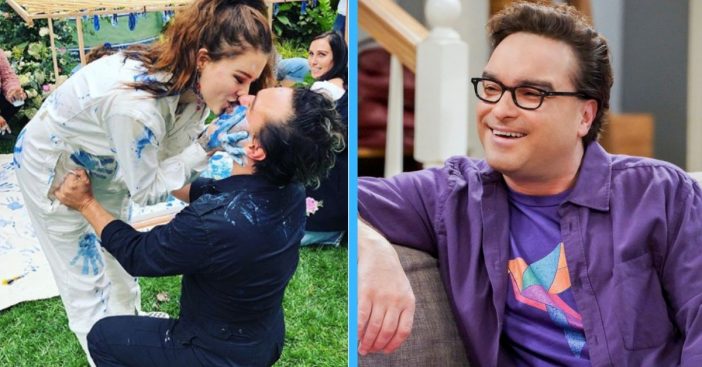 The original post from Johnny’s Instagram said, “We are absolutely over the moon to announce that we will soon be welcoming a little one into this crazy and wonderful world. We ask that you please respect our privacy during this celebratory time for us and our families.” From the looks of it, there was a massive explosion of blue paint at a gender reveal party that the two planned together!

“A day I’ll never forget,” Johnny wrote on his Instagram alongside the photo of he and his girlfriend covered in blue paint. His girlfriend, Alaina, also posted a photo on her Instagram account saying, “I can not wait to raise a baby boy with my love. He will follow in his fathers footsteps of being a generous, loving, chivalrous fellow.”

It looks like the two are super excited to eventually be bringing a new bundle of joy into the world!

Johnny was part of the cast of The Big Bang Theory, which recently just aired its final episode after being on the air since 2006. He was also on Roseanne and its spinoff series, The Conners. According to Galecki’s IMDb, he doesn’t have any upcoming movies or TV series that he’ll be appearing in. His last film was in A Dog’s Journey this year.

According to PEOPLE, Johnny went on the show The Talk with pink nails that prompted some questions about the gender of the baby. He revealed that he secretly wished for a daughter. “I get a little bored looking exactly the same way for nine and a half months every year playing Leonard,” he said of his Big Bang character, “So we wrapped and I threw some blue in my hair, then I got superstitious that I was manifesting a boy, when I kind of prefer a girl,” he said.

He then quickly stopped himself and jokingly said, “Don’t play this tape for my child years from now! I painted my nails pink to try to even out the energy there.” He has reiterated that the baby’s health is the most important thing to him and not the gender!

The Big Bang Theory has ended after being on TV for over a decade! What did you think about the series finale?

Previous article: Bob Newhart Remembers Tim Conway And His Ability To Make Anyone Laugh
Next Post: Marie Osmond Shares Update On Her Newborn Granddaughter In NICU