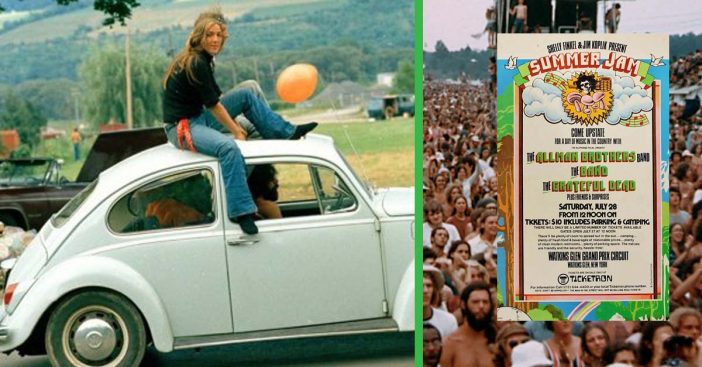 It was called Summer Jam ’73. It was held at the Watkins Glen Grand Prix Raceway in Watkins Glen, New York. It was only a one-day festival and had only three acts, but they were big ones! These acts were The Grateful Dead, The Band, and The Allman Brothers Band. It was held on July 28, 1973.

Here’s how many tickets were sold vs. how many showed up

150,000 tickets were sold but a record-breaking 600,000 fans showed up! The traffic was so bad, that many concert goers left their cars and walked to the festival so they wouldn’t miss a thing. Can you believe it was only $10 for everything? These days, parking is generally more than $10 for concerts!

Many fans showed up the day before, so they actually saw the bands perform soundchecks and preparing for the big concert sets. Many people set up tents, but others would just lay on the ground to prep for the incredible festival.

The Grateful Dead performed first. Next up was The Band. In the middle of their set, it started pouring down rain. Everyone except keyboardist Garth Hudson went off stage to let the rain pass by. He kept jamming in the rain!

Lastly, The Allman Brothers performed with new and old songs. The concert went well into the next day because the bands were so excited to be there. All three of the incredible bands came together for an hourlong encore, performing past 3 a.m. on July 29th.

So, why don’t many people remember this amazing event?

Reportedly, drug use was very heavy and many attendees don’t remember the event because they were so strung out. Many people smoked marijuana or drank alcohol at the Summer Jam and unfortunately, there were many overdoses that night. All three bands were also reportedly on drugs.

Many also think that the hippie movement was moving on in 1973, and that is why Summer Jam is not as remembered as fondly as Woodstock. Others think that the stage was too far away from the fans, so it was just not as special as Woodstock was.

Whatever you believe, it was still one of the coolest music festivals in history! Check out some video of the infamous music festival:

Do you remember Summer Jam ’73? Did you attend this crazy day?

Do you prefer Summer Jam ’73 or Woodstock? Learn the real reason why the original Woodstock site was excavated!

Previous article: Learn Jackie Kennedy’s Secret To Perfect Skin
Next Post: Six Images Of The Great Pyramid Of Giza That Will Make You Feel Microscopic