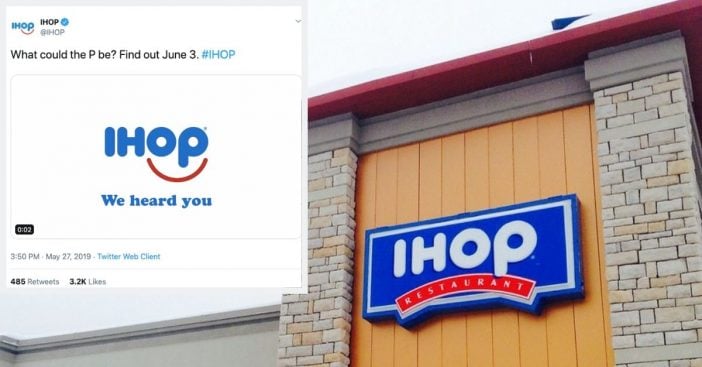 Remember when IHOP decided to randomly change its name to IHOb in an effort to promote their new line of burgers? Well, it looks like they’re changing it again, but this time it’s staying IHOP… they’re just changing the actual meaning of the ‘P’ in the name. And people are having way too much fun guessing what it could be!

The official IHOP Twitter account sent out a tweet that read, “What could the P be? Find out June 3. #IHOP.” We’re experiencing major deja vu right now!

What could the P be? Find out June 3. #IHOP pic.twitter.com/fARA5GmQj1

However, in the video that accompanied the message on social media, it showed the ‘b’ from last year’s promotion (IHOb) being changed to a ‘P’. So, did they never officially change back to IHOP? Or is it a whole new meaning to the letter ‘P’? Some of us are genuinely confused!

Similarly, they posted a new tweet today that read, “Last year, the Internet had a lot to say about IHOb. Well, we heard you. Stay tuned for June 3. #IHOP” with another video that showed tons of fan’s tweets telling them to stick to what they’re good at (aka pancakes). So, we’re getting the vibe that maybe they just never officially changed from IHOb or they’re doing something neat with their pancake line. What do you think?

Last year, the Internet had a lot to say about IHOb. Well, we heard you. Stay tuned for June 3. #IHOP pic.twitter.com/ycbk0rKAY8

IHOP nearly broke the Internet last year when they pulled the same thing on social media, tweeting about changing their ‘P’ to a lowercase ‘b’ and having the world guess that the ‘b’ stood for. Many people thought it could’ve been ‘breakfast‘ or something similar, but it was actually to promote their burgers.

The chain even went as far as to have many of their outside signs changed from IHOP to IHOb, even though the burger promotion was seemingly short-lived.

Many people have been flooding IHOP’s Twitter account trying to guess what the ‘P’ could now stand for. Whoever manages the IHOP account is even going as far to respond to some of the ideas from their following!

One person said, “I’m guessing pancakes on burgers… maybe,” in direct reference to their burger promotion from last year. They responded, “Probably not… but definitely not definitely not.”

Another person guessed the International House of Pizza. Can’t lie, I would totally go and try some just to see if it was any good (nothing beats their pancakes though!).

Another person even suggested that the ‘P’ stood for ‘people’. Hey, anything is a possibility when it comes to IHOP!

Relive the memories from when IHOP announced their new name and its meaning last year!

Previous article: Ten Celebrity Couples That Have Been Together Forever
Next Post: The ‘Brady Bunch’ House Renovations Are Finally Finished