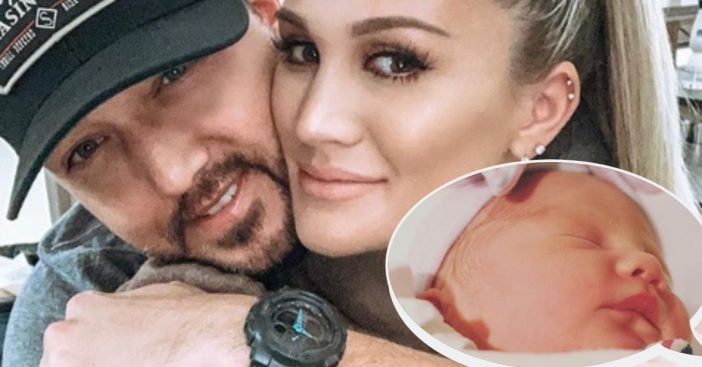 Country star Jason Aldean and his wife, Brittany, have just welcomed a new baby girl in the world named Navy Rome. Weighing in at 7lbs 12oz, the couple is incredibly thrilled to bring a brand new addition into the family to accompany their one-year-old son, Memphis Aldean.

“Today our family became complete as we welcomed our daughter Navy Rome to the world,” Jason takes to Instagram, accompanying a beautiful photo of their newborn baby girl. “Born on 2/4/19 weighing 7lbs 12oz and looking identical to her older brother. So excited to watch what life has in store for this little princess.”

Brittany also took to her Instagram account to share the same photo of baby Navy Rome, saying, We welcomed our daughter Navy Rome into the world today at 12:45 P.M., 7lbs 12oz of pure preciousness. We love you so much baby girl!!”

There is no meaning known behind their baby girl’s name, Navy Rome, yet. But Brittany did, in fact, reveal the name of the baby at her baby shower back in November! What we know for sure is that it is an absolutely beautiful name and she’s definitely got a great set of parents.

The new parents welcomed their first child, Memphis Aldine Williams, on December 1st, 2017. With this being said, Jason did explain the meaning behind his son’s name, so maybe we can hope for an explanation behind Navy Rome’s name? Jason was saying how he’d always been a big Elvis Presley fan, and since he lived in the famous Graceland estate in Memphis, it’s no wonder where he got the name inspiration from.

Jason also has two daughters, Keeley and Kendyl, with his ex-wife Jessica Ussery, making it a family of 6!

According to reports, the baby shower/gender reveal back in November was a huge success. Just before the proper gender reveal, big sister Keeley Aldean had actually suspected that it was a girl and that she would be gaining a new baby sister. “I think a girl because you’ve been a bit sicker with this one,” she said, directed towards Brittany.

Allenbrooke Farms owner Stephanie Allen confirmed how the event was a huge success and that everyone was super excited to be there. “We did a happy, modern, fun, tropical vibe,” she explains.

Be sure to SHARE this article if you’re excited about the newest addition to the Aldean family!

Check out the news coverage on this story below along with some additional exclusive photos: